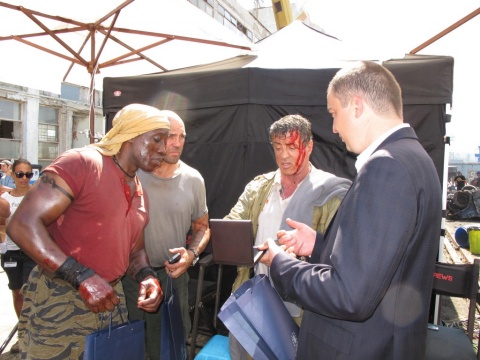 The Mayor of Bulgaria's Black Sea city of Varna has met personally on Friday with Sylvester Stallone, Wesley Snipes and Jason Statham from the cast of the Hollywood hit, shot in the coastal city.

Ivan Portnih, Varna's Mayor, visited the shooting scene of the Hollywood movie "Expendables 3" which is now filmed in the city's old shipyard. He met with part of the star-studded cast who showed him some scenes and told him interesting details about the film production.

"We have been kindly welcomed by the film crew; the actors were very friendly and shared their good impressions of the city. They were highly interested in the replicas of the world's most ancient gold treasure, found in Varna, which we gave them as present," said Portnih.

Ivan Portnih was specially invited by Avi Lerner, one of the most successful and experienced filmmakers of our time, who is also a producer of the "Expendables 3," along with Stallone.