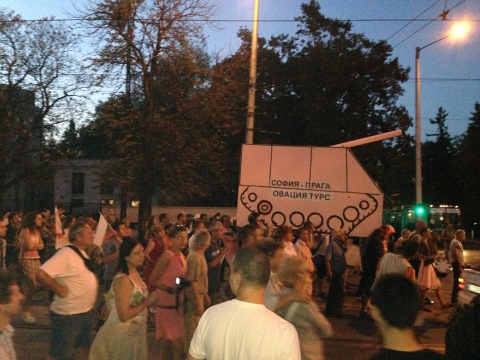 Anywhere between 150 and 300 Bulgarians, according to different estimates, have taken once again to the streets of the capital Sofia Thursday evening to demand the resignation of the country's government.

The rally was held for a 70th day in a row in the record-long protest in the country.

As usual they held banners and national flags and shouted very loudly "mafia" and "resignation." They reminded that in just 12 day the Members of the Parliament will be returning back from their summer break and the protests will resume full force.

A cardboard pink tank was a special feature of the Thursday rally in a tribute to Czech artist David Cerny, who in 1991 painted pink the Soviet tank memorialized in Prague as a supposed symbol of Soviet liberation.

The square and "Dondukov" boulevard were blocked for traffic. There was riot police presence.

Before the traffic blockade, passing drivers honked in demonstration of support.

The rally ended around 9 pm.

The series of relentless and mass rallies, at times reaching 30-40 000 in Sofia, was triggered by the appointment of notorious media mogul and lawmaker Delyan Peevski as Head of the State Agency for National Security (DANS) back on June 14.

On August 21st, in honor of the 45th anniversary of the Soviet/Warsaw Pact crackdown on Prague's Spring, unknown street artists painted the Red Army soldier figures on the Soviet Army Monument in downtown Sofia in pink, in a tribute to Cerny, and with the inscriptions in Bulgarian and Czech "Bulgaria apologizes" ("Bulharsko se omlouv?").

In the aftermath, the Sofia Regional Prosecutor's Office launched pre-trial proceedings against an unknown perpetrator for hooliganism.

On Thursday, the Russian government announced it intended to formally request from Bulgarian authorities that they punish people who sprayed the pink color on the Monument.

On Wednesday, the Sofia Regional Governor, Rosen Malinov, appointed by the left-wing Bulgarian Socialist Party, BSP, said he was sending a request for a probe to the prosecution, and issued an order with a 3-day deadline to clean the monument.

The artistic apology for Bulgaria's support of Warsaw Pact troops which crushed Czechoslovakia's Prague Spring uprising in 1968 was removed overnight Wednesday into Thursday.

Proceedings against the above "decoration" of the Monument in 2011 were halted as the authorities failed to identify the perpetrator(s).