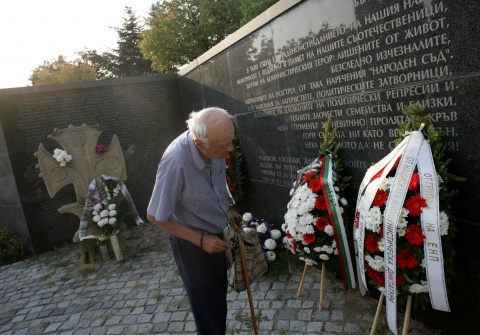 An elderly man looks at the wreaths laid at the Memorial for the Victims of the Bulgarian communist regime in downtown Sofia. Photo by BGNES

Bulgarian citizens have honored Friday the memory of the thousands of victims who perished in the repressions of the Bulgarian communist regime (1944-1989).

The remembrance took place at the special memorial in downtown Sofia, near the National Palace of Culture, on the occasion of August 23, the European Day of Remembrance for Victims of Stalinism and Nazism.

At 10:30 am they laid wreaths and flowers and bowed to the victims.

According to data of the Union of Bulgarians Repressed by the Communist Regime, over 30 000 people perished in the first years after the establishment of the communist regime in Bulgaria in 1944-1948, while thousands technically remain missing as a result of the communist repressions.

August 23 was chosen to coincide with the date of the signing of the Molotov-Ribbentrop Pact, in which the Soviet Union and Nazi Germany agreed to divide Eastern Europe between themselves, an event described by the European Parliament's President Jerzy Buzek in 2010 as "the collusion of the two worst forms of totalitarianism in the history of humanity.

In November 2009, the Bulgarian Parliament followed suit by declaring August 23 a day of remembrance for the victims of the crimes of all national-socialist, communist, and other totalitarian regimes in the world.

The Members of the Parliament from the Bulgarian Socialist Party, BSP, on whose mandate the current Cabinet was formed, were the only ones to not vote in support of the declaration and since then have never taken part in any ceremonies on the occasion.

"Bow your head, Bulgarian. This wall incorporates the suffering of our nation. Let the memory of the innocent spilled blood burn our hearts in eternal flames. Let the past never be repeated," states the inscription on the wall of the downtown Sofia memorial for the victims of the communist repressions in Bulgaria.