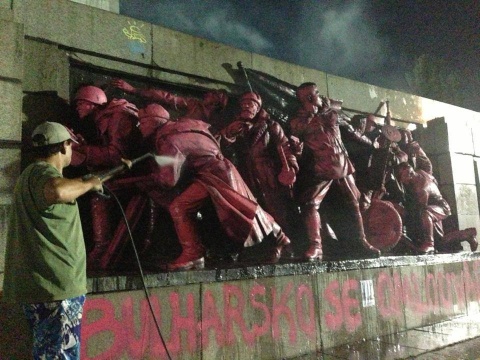 An artistic apology for Bulgaria's support of Warsaw Pact troops which crushed Czechoslovakia's Prague Spring uprising in 1968 has been removed overnight.

The main Soviet Army Monument in Bulgaria's capital Sofia was painted pink by unknown artists in the wee hours of Wednesday, with the words "Bulgaria apologizes" written in Czech and Bulgarian underneath. August 21st marked the 45th anniversary of Soviet crushing of the Prague Spring.

The choice of color was apparently a tribute to Czech artist David Cerny, who in 1991 painted pink the Soviet tank memorialized in Prague as a supposed symbol of Soviet liberation.

But unknown volunteers have now rubbed the monument in downtown Sofia clean, reporters found out early on Thursday.

According to local media reports, the overnight cleaning operation was organized by the "forum Bulgaria-Russia" - the same organization that removed the monument's prominent "superhero makeover" back in 2011. Dnevnik.bg notes that the reports have not been confirmed officially.

Bulgaria was the first country to insist on the infamous Prague Spring invasion and the last one to apologize for its participation – with a declaration of the Parliament in 1990 and in 1997 during the visit of right-wing President, Petar Stoyanov, to Prague.

Thursday marks the 70th straight day of anti-graft protests against Bulgaria's embattled Socialist-led government. On Wednesday, several hundred protesters in Sofia held a minute of silence in honor of the victims of the Warsaw Pact invasion of Czechoslovakia. The demonstrators also demanded that the Soviet Army Monument in Sofia be dismantled.