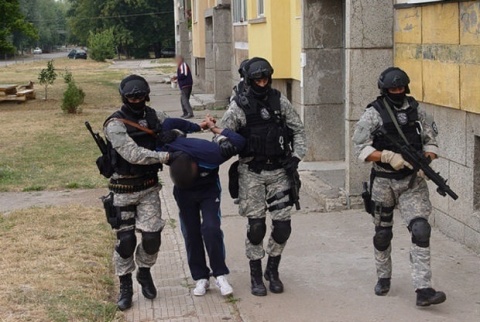 Photo by the press office of Bulgaria's Interior Ministry

According to a media statement of the prosecuting authority, 8 members of the crime ring were arrested on August 16, 2013 in a specialized operation of the "National Police"Chief Directorate of the Interior, while the other 3 are still wanted.

According to the evidence gathered so far, the crime group functioned in the period 2004 – August 16, 2013, on Bulgarian territory, in the cities of Pernik, Radomir and Sofia, and was mostly involved in contract killings and drug dealing.

During the arrest of Vasil Vasilev, alleged leader of the crime ring, he was found to posses two combat pistols, one with a bullet in the barrel, and the other with a muffler clamp, ammunition, body armor, a gas pistol, and bladed weapons. Vasilev is also known for surviving an assassination attempt.

The eight suspects have been detained for up to 72 hours, and the Specialized Criminal Court is to decide on a request for remanding them in custody.

Police officers reported Friday that they had found the human remains of at least three people believed to have been murdered by the crime group.

The victims of the crime group are believed to be at least seven, but their exact number and identity is yet to be specified, according to the Bulgarian National Television.