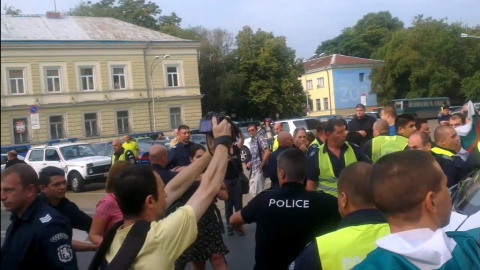 The brief violent encounters erupted after protesters for and against the Socialist-backed government tried to break the police cordone, set up to keep the two rallies apart. Photo by offnews.bg

Citizens supporting the Socialist-endorsed government of Prime Minister, Plamen Oresharski, and others, calling for its resignation, clashed on Friday morning in the Bulgarian capital Sofia.

Protesters, supporting the cabinet, want MPs to conclusively pass the budget revision, after the President-imposed veto, and to have a functioning Cabinet and Parliament, working without pressure.

Meanwhile an anti-cabinet protest rally also assembled in front of the building of the National Assembly.

The brief violent encounters erupted after the protesters tried to break the police cordone, set up to keep the two rallies apart.

The Bulgarian Parliament is holding a special plenary sitting Friday morning to discuss and vote on Bulgaria President Rosen Plevneliev's veto on a recent budget update.

Since June 14, Bulgarian capital Sofia has been gripped by strong ralllies against the new government of PM Plamen Oresharski, which however have abated during the holiday month of August.

Anti-government protesters are also largely against the budget revision, which, if implemented, would see the government taking a BGN 1 B loan to be largely used for paying arrears to businesses and increased social benefits.

President Plevneliev has motivated his veto by what he has called the lack of transparency and the excessive amount of discretionary spending in the revision.