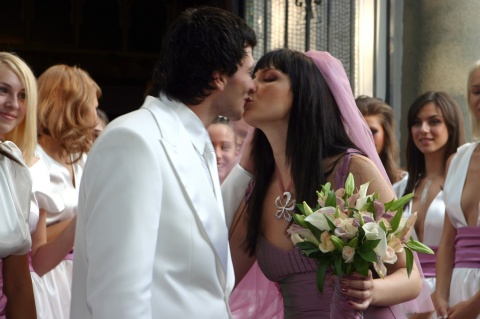 Evgenia Kalkandzhieva, Bulgaria’s top model and fashion guru, said "I do" to her once beloved and much younger boyfriend Stefan Manov at a fairytale wedding in Sofia on the last day of August 2007. Photo by Sofia Photo Agency

Evgenia Kalkandzhieva, Bulgaria's top model and fashion guru, has confirmed rumors she is about to divorce, six years after saying "I do" to her once beloved and much younger boyfriend Stefan Manov.

“We have filed for divorce. We see no point in our relationship any more. But we both love our son Zhorko and will continue to take care of him together,” Kalkandzhieva told local lifestyle magazine Story.

In an unprecedentedly candid interview, Kalkandzhieva shared that hеr husband Tacho has not only moved out of their family house, but is already living together with another woman, who was his lover.

Evgenia Kalkandzhieva founded and has been managing Bulgaria's most successful fashion agency Visages for over a decade, discovering and promoting some of the country's best-known fashion beauties in the world.

In 1995 Kalkandzhieva was crowned Miss Bulgaria and ranked sixth at the follow-up Miss World contest, making her the best model the country has ever had.

Her fairytale wedding in Sofia at the end of August 2007 made headlines not only because of Zheni’s excitement from the new life and new dreams ahead, but also because of the wedding stylish scenario and Zheni's violet dress.

A total of 20 bridesmaids, some of whom have been named Miss Bulgaria in the last decade, held the long train of her gown and showered the couple with coloured rice.