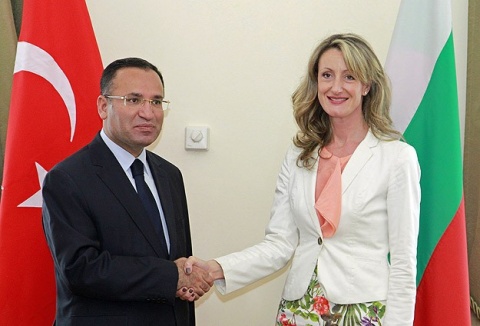 Bozdag, who is in charge for policies relating to Turkish communities abroad, makes regular visits to them for Muslim religious holidays.

During this week's visit to Bulgaria for Eid (Ramazan Bayrami), he visited the cities Shumen, Ruse, Plovdiv and Kardzhali among others.

Saturday the Anatolian Agency reported the Turkish Vice-PM found that many of the old Ottoman sites in Bulgaria, including some of the largest mosques on the Balkans, are not well maintained.

The Agency also reports that Bozdag had brought this fact to the attention of Bulgarian Vice-PM Zinaida Zlatanova and possibly to Bulgarian President Rosen Plevneliev.

Both meetings were poorly reported in Bulgaria. The iftar dinner with Plevneliev Wednesday in Plovdiv caused controversy, when Bulgarian journalists were not allowed in.

Bozdag is said to have expressed particular grief of the state of the Great Mosque and the hamam in Plovdiv.

According to the Anatolian Agency, the Turkish Deputy-PM has also said that Turkey will seek to acquire some of those historic sites.

"We will reclaim Ottoman works in Bulgaria," said Bozdag, as reported by the Anatolian Agency.

During his visit, Bozdag described Bulgaria as a "strategic partner" with Turkey, and called the large ethnic Turkish community in Bulgaria "a bridge between the two nations."

Bulgaria was under Ottoman rule for five centuries, from the end of the 14th century until 1878.