Socialist Leader Stanishev Said to Pull the Strings in Bulgaria 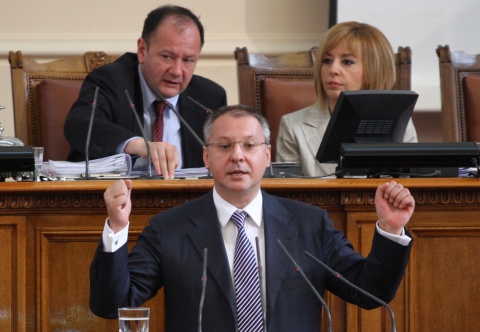 Bulgaria’s Socialist leader is behind the controversial revision of the budget, which parliament approved at the end of last month, citing underperformance, an economy expert claims.

“The budget revision aims to divert the public attention from the problems ripping apart the ruling majority. I have reasons to believe the update of the budget was planned and initiated by Socialist leader Sergey Stanishev, not by the members of the cabinet,” Krasen Stanchev, a director at the Institute for Market Economy in Sofia, commented for Capital newspaper.

“Prime Minister Plamen Oresharski and Finance Minister Petar Chobanov are two very good economists and they knew too well what the prospects for the budget are to take such a sudden decision,” he added.

According to him Oresharski and Chobanov are in no control of the situation and have made hints the budget will benefit certain companies.

President Rosen Plevneliev imposed on Wednesday a partial veto on the Law on Amending and Supplementing the State Budget Act for 2013, saying the Socialist-led government had not shown enough transparency in its use of public money.

He explained that the package of social measures included in the budget update constituted a very small share of the earmarked expenses.

Plevneliev pointed out that there was insufficient information about how the new debt of BGN 1 B would be spent.

He noted that he failed to see serious plans about policies and reforms in support of competition and economic growth.

The budget revision provides for a new loan in the amount of BGN 1 B to be used as a buffer for the fiscal reserve in 2014, when Bulgaria must make new payments on its foreign debt. Other funds will be slated for the overdue money for the business and for social measures.

Economic growth is revised down to 1% from the original figure of 1.9%, while deficit increases by BGN 493 M, accounting for 2% of forecasted GDP.

“The president has grossly interfered with the executive authorities in yet another one-sided and unbalanced action," Prime Minister Plamen Oresharski said in an official statement.

It pointed out that the budget revision aims to correct the country’s fiscal policies from th last few years, which hampered economic growth and limited the opportunities for assistance to vulnerable groups in the society.

Oresharski listed once again the reasons that forced his government, under pressure to quit after weeks of protests, to revise this year's budget, saying it thus sets right the misleading forecast for revenues and spending.