Man Dies from Heart Attack in Collapsed Bulgarian Mine 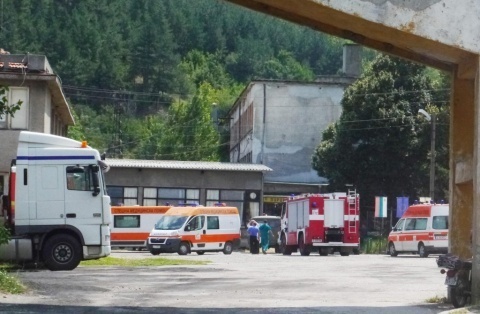 The Oranovo coal mine in southwestern Bulgaria turned the scene of a new tragedy Thursday after a worker died from a heart attack inside. Photo by BGNES

A worker has suffered heart attack and has passed away inside the collapsed Oranovo mine in southwestern Bulgaria.

The man, identified as Asen Grancharov, 49, was a miner, who was not part of the search team, but of the auxiliary staff. The incident happened shortly after 7 am Thursday. Bulgarian police and the emergency medical unit received the call around 7:30 am.

Grancharov is from the southwestern city of Blagoevgrad. His brother has been notified. His wife, according to bTV, works in the central town of Karlovo.

The Chief of the Regional Directorate of the Interior Ministry in Blagoevgrad, Police Commissar Georgi Kostov, is at the scene, along with the mine's manager, Valeri Manov, the head of Blagoevgrad work safety office, investigators and police officers.

Ambulances and vehicles of Civil Defense were dispatched there as well, but have established the cause of death and left.

Manov confirmed for the media that this was not a work related incident and the man fell ill and died, most likely, from a heart attack.

An autopsy is pending, according to Kostov.

The search effort to find two miners trapped inside since July 16, when the mine collapsed, is continuing for the 17th consecutive day.

The search team was able to advance by 2.5 meters over the last 24 hours, digging in the mud and rock in the gallery where the two are presumed to be.

On Wednesday, the miners and the rescue team from the Bobovdol mine ended excavating the 33-meter-long detour gallery, only to find out that gallery A, where their colleagues were trapped over 2 weeks ago, is filled with mud and is inaccessible.

After the mine collapsed on July 16, miners Ivan Lazarov, 35, and Nikolay Mihaylov, 42, were trapped 450 meters below the surface underneath an avalanche of mud, rocks and water.

Blagoevgrad Regional Governor, Musa Palev, says the situation is the most difficult for their close ones, adding the municipality was ready to offer any kind of assistance, including meetings with psychology therapists.

Both are neighbors from the nearby village of Krupnik. Nikolay only has one sister, while Ivan has a mother and a brother who works as a firefighter.

The rescue and search teams include 20 people, working in three shifts.

The excavation of the detour gallery started one week ago, after the crisis headquarters, and the expert group formed under the order of Economy and Energy Minister, Dragomir Stoynev, decided to use a bypass route.

This was imposed by emerging serious risks for the rescue teams over mudslides and water leaks in the collapsed gallery.

All works in the mine were put on hold, and all effort was focused on finding the two people trapped inside.

Locals are flocking to churches to light candles and pray for the lives of Mladenov and Lazarov.

Stoynev has vowed on several occasions to bring to justice those guilty for the deadly accident.

The Minister noted the government will reexamine not only the Oranovo concession, but all others.

The Mayor of Simitli, Apostol Apostolov, insists miners in the Oranovo coal mine make the lowest wages in the entire municipality.

According to him, the majority earn the meager BGN 300-400 a month.

The mine's concessionaire, Krasimir Mihaylov, was interrogated on July 19 in the 2nd Police Precinct in Blagoevgrad where he turned himself in hours after the Prosecutor's Office issued a search warrant for him.