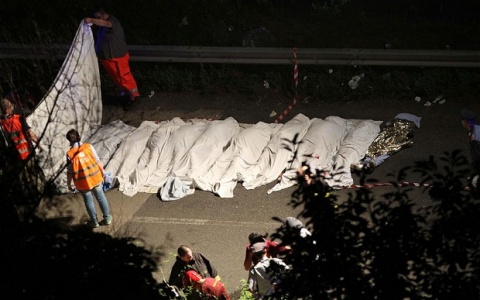 The bodies of the victims of the bus crash in Italy, photo by EPA/BGNES

A coach with pilgrims has plunged off an overpass in southern Italy leaving at least 37 people dead, according to local media.

There are children among the victims, the driver has been also pronounced dead.

At least 11 people (3 of them children) have been injured, some of them seriously, the Italian news agency Ansa, cited by the BBC, reported.

The coach was taking about 50 people, including children, back to Naples following a pilgrimage. It was traveling on highway A16 between Bari and Naples, near the city of Avellino, when it smashed through a guardrail on the overpass and dropped 30m.

The injured have been taken to hospitals in Avellino, Salerno and Nola.

The cause of the accident is not clear, but the initial lead points at faulty breaks.

34 of the bodies have been taken out from the remains of the bus, while the others flew out during the fall.

A16 between Bari and Naples is closed for traffic.