10 Injured as Police Crack Down on Bulgaria Anti-Govt Protesters 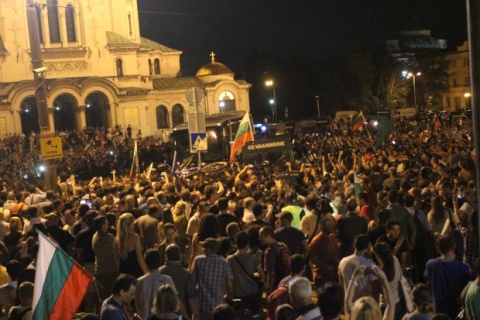 Thousands of people chanted "mafia" and "resign", refusing to let three ministers and a number of lawmakers leave the building. Photo by BGNES

Riot police cracked down on Bulgarian anti-government protesters in the capital Sofia late on Tuesday, as government officials, MPs and journalists remained trapped in the Parliament building for some ten hours.

Tuesday marked the 40th straight day of mass protests against the country’s embattled government – and for the first time, police clashed with demonstrators.

Tensions rose as lawmakers discussed a controversial budget update that envisages increasing the deficit by around BGN 500 M and increasing the borrowing limit by BGN 1 B. The budget revision was discussed at an ad hoc sitting starting 5 pm EET – and the unusually late hour allowed the evening rally to block the doors of a Parliament building full of officials.

Thousands of people chanted "mafia" and "resign", refusing to let three ministers and a number of lawmakers leave the building. Many journalists also remained trapped inside.

The rally turned bloody at around 10 pm, when a bus carrying the ministers of finance, labor and economy, as well as an undisclosed number of ruling MPs, attempted to leave Parliament under heavy guard.

Protesters forced the bus to retreat, and several of them were beaten and injured by riot police.

By 2 am Wednesday, protesters had reinforced the blockade with garbage cans, street signs and paving stones, blocking vehicles from leaving any of the exits from Parliament.
Officials eventually left the building at around 5 am Wednesday, according to local media.

Some 10 people were injured, the Bulgarian National Radio says. No serious injuries have been reported.

The protests were fueled by a number of other controversial appointments over the past several weeks, including that of ultranationalist party leader Volen Siderov as chair of the Parliament’s committee on ethics and conflict of interests.

Last week, Emil Ivanov, a man linked to one of the most notorious organized crime groups from the 90s, was appointed as Regional Governor of Sofia.