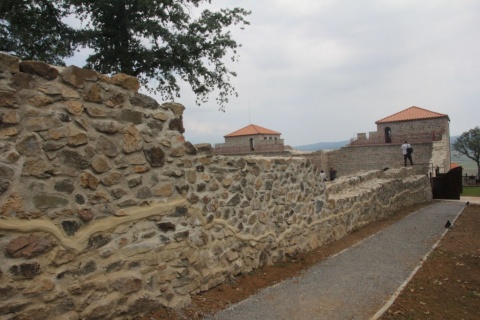 The Roman fortress in the village of Belchin is the first one to be fully restored in Bulgaria. Photo by pressadaily

The first fully restored Roman fortress in Bulgaria in the village of Belchin near the mountain town of Samokov has enjoyed huge interest over the weekend.

Several thousand have visited the "Tsari Mali Grad" fortress since it opened doors for tourists on Saturday, July 20.

The finished project was officially inaugurated on July 18 by Regional Development Minister, Desislava Terzieva. The Mayor of Sofia, Yordanka Fandakova, who in her youth has been a teacher in Belchin, also attended the ceremony. Culture Minister, Petar Stoyanovich, and the Mayors of Belchin and Samokov were present as well.

The visitors can see an exhibit of Roman military armor and battering rams, and to learn about ancient crafts in Bulgaria such a coin minting. The rope bridge is a special attraction, particularly for the youngsters.

A folk festival and a reenactment of a battle between proto-Bulgarian soldiers and Roman legions were also held over the weekend.

The construction of the fortress has started during the rule of Emperor Valentinian I in the 4th century AD.

The location has been selected because it is strategic and allows monitoring of the entire valley and protection of its western side. The settlement itself is also related to the mineral springs, the deposits of magnetite sand and the strategic junction of two ancient roads.

Until recently, the fortress has never been used by the Bulgarian State.

Several years ago, archaeological excavations revealed that it was huge and covered an area of over 14 decares.

The EU funded the restoration project with BGN 5.5 M.

The project included the rebuilding of the fortress walls, and the construction of a museum and a church. There is also a lift from the village to the site.