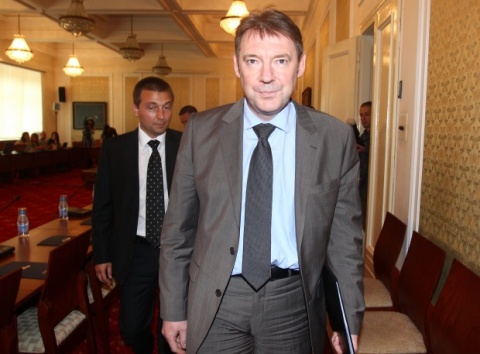 Vladimir Pisanchev is the new director of the State Agency for National Security, DANS. Photo by BGNES

Bulgaria's parliament elected on Friday Vladimir Pisanchev for new director of the State Agency for National Security, DANS, after surprisingly postponing the decision a day earlier.

He is best known for his involvement in the "Galeria" spying scandal.

The notorious operation "Galeria," in which DANS was exposed in unauthorized spying on journalists, MPs, and business people, started shortly after the Agency's launch in 2008 (during the term of the Three-Way Coalition, 2005 - 2009), over suspicions of leaks of classified information from its employees to the now-closed site "Opasnite" (The Dangerous) and several other media.

Vladimir Pisanchev, then Head of the Security Directorate of DANS, was accused by one of these MPs - Socialist Tatyana Doncheva, of giving the green light to the unauthorized wiretappings.

He firmly denied the accusations, but was nevertheless dismissed by the DANS Head at the time - Petko Sertov. Sertov also dismissed Deputy DANS Chief, Ivan Drashkov.

DANS recently published on its official website 30 declassified pages from "Galeria," conclusively proving that Pisanchev was the one to propose the launch of the case.

It was Bulgarian Prime Minister, Plamen Oresharski, who chose Vladimir Pisanchev as his nomination for director of the State Agency for National Security, DANS.

The election was initially scheduled as the first item on the MPs agenda on Thursday and was supposed to start at 9 am.

While opening the Thursday sitting, the Speaker of the Parliament, Mihail Mikov, informed that Oresharski had not yet submitted his nomination.

Under the recently voted controversial amendments to the DANS Act, its director is elected by the Parliament after the PM submits a proposal.

On Tuesday, the parliamentary committee for control of security agencies held a hearing of the two candidates for the post - the Head of the DANS Classified Information Directorate, Nedyalko Nedyalkov, and interim DANS Director, Vladimir Pisanchev.

On Wednesday, the committee informed both candidates had equal merits and decided to not recommend to Oresharski one of the two in order to allow him to make his own decision.

The DANS director vacancy opened after the resignation of Konstantin Kazakov and after Bulgaria's Parliament revoked the appointment as his successor of notorious media mogul Delyan Peevski amid rising public discontent.

The above appointment triggered mass and persisting anti-government protests in the country, which are now in their second month.

Although the appointment was revoked, Bulgarians went on to demand that the Socialist-endorsed cabinet of Prime Minister Plamen Oresharski resign collectively.