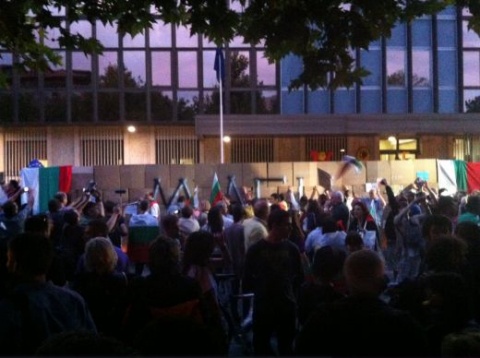 A symbolic wall made of cardboard boxes was torn down by Bulgarian anti-government protesters in front of the German embassy in Sofia late on Tuesday.

The wall – which had the word “Mafia” and the names of the political parties in Bulgaria’s Parliament written on it – symbolized the government’s ties with murky oligarchs.

The protesters arrived at the German embassy in Sofia in order to express their gratitude to Ambassador Matthias Hoepfner, who, together with his French colleague Philippe Autie, warned the Bulgarian government last week that the oligarchic model is incompatible with EU membership.

Ralliers already thanked Autie by amassing in front of the French embassy in central Sofia, on the eve of France's national holiday, July 14.

On Tuesday, protesters also showed their support for the Bulgarian National Radio for the extensive and sympathetic coverage it has been giving rallies.

Massive peaceful rallies have been staged in the capital Sofia for 33 days now.