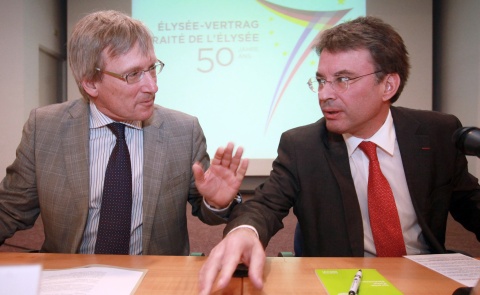 The Ambassadors of Germany and France to Bulgaria, Matthias Hoepfner (L) and Philippe Autie (R), have issued a joint statement on the current situation in the country. Photo by BGNES

The Ambassadors of Germany and France to Bulgaria, Matthias Hoepfner and Philippe Autie, have issued a joint statement on the current situation in the country, stressing that the voice of civil society must be heard and warning that the oligarchic model is incompatible with EU membership.

"Germany and France, just as all of their European partners, have been closely following the crisis developing in Bulgaria, the second in less than six months: a crisis of confidence in the mode of government of the country, as the ongoing protests show" the joint statement says, as cited by 24 Hours daily.

"It has already become clear that Bulgarian society demands insistently that the political, administrative, judicial, and economic elite heed the principles of public interest. It is obviously concerned about the penetration of private interests in the public sphere," the statement says.

"The need to appoint indisputable candidates on public posts – people who are competent, who place the common good above individual interests and who are capable of withstanding pressure - is evident in democracies. This requires transparent and well-thought-out procedures. In Bulgaria, just as in other countries, this is undeniably crucial to all bodies in charge of fighting organized crime and corruption, of guaranteeing domestic security, of controlling trade, and of securing the country's energy needs in line with its strive for independence. In all these areas, non-transparent appointments can only benefit corruption and organized crime," the two Ambassadors say.

"Democracy cannot go without media pluralism. A growing number of Bulgarian citizens and European partners of Bulgaria are worried by the increase in concentration of ownership of print and electronic media under opaque terms and the ensuing risks for freedom of expression. Media pluralism also presupposes an efficient legal framework for fight against concentrations, whose implementation is efficiently overseen by the competent institutions.

Belonging to the European Union is a civilised choice. The oligarchic model is incompatible with it, both in Bulgaria and elsewhere: it can only lead to the creation of a "state within a state," the diplomats say.

"The current crisis of confidence should not lead to the adoption of pessimist views on the future of Bulgaria. To the contrary, it expresses the firm will of Bulgarians to make sure that the country's government serves public interest," the statement says.

"The civil society upsurge is great news with the civic spirit, its commitment to democracy, its refusal to yield to provocations, and its care for the future. The way Bulgarian police have guaranteed the peaceful manifestation of that civil society over the past few weeks deserves respect. It actually deserves to be heard: an active, strong, modern civil society which believes in its country and wonders what it can do for it is a fundamental pillar of any democracy in the world, as well as of Bulgaria's future," the two Ambassadors say.

"Faced with these challenges, it is up to the main institutions and political parties to join forces to find all possible ways of achieving progress, taking into account the demands of society," the media statement says.

"We salute the determination of President Plevneliev to preserve the inseverable adherence of Bulgaria to European values ??and the rule of law, and to call for transparency, moral and ethics. The role of a guarantor of  institutions and national unity fulfilled by the head of state is essential in the current circumstances and deserves respect," the diplomats say.

"Parliament is the natural place to hold political debate.This debate presupposes the participation of all elected political parties. However, acts of extremism and statements rooted in xenophobia and intolerance, incitement to racial, ethnic, or religious hatred and violence, provocation, and breaches of  public order, are unacceptable, especially in an EU member state; it is also obvious that any country observing the rule of law must impose penalties at the very point of breach of law.

"The good governance of the country is in the interest of all Bulgarians. However, it is also in the interest of all Europeans: as taxpayers (almost 40% of the EU funds granted to Bulgaria come from German and French taxpayers), because our economies are interrelated; and simply because our fates are connected in the future," Hoepfner and Autie say.

Their statement comes on the 25th day of anti-government protests in Bulgaria.