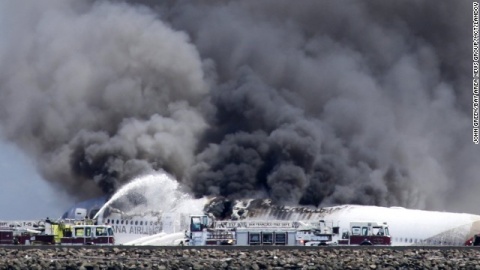 At least two people have died and dozens more injured as a Boeing 777 aircraft crash-landed at San Francisco international airport.

The two confirmed fatalities are Chinese citizens, according to South Korea's Transport Ministry.

Pictures posted on Twitter showed passengers jumping down the inflatable emergency slides and leaving the area, as plumes of smoke rise from the plane.

Fire fighters and rescue teams are at the scene of the downed Asiana Airlines Flight 214, which had taken off from South Korea's capital, Seoul.

The cause of the crash is unclear.

Early indications suggest the plane came in too short and hit the seawall at the airport.

There were 291 passengers and 16 crew on board, Asiana said.

Nationalities on board included 141 Chinese, 77 South Koreans and 61 US citizens, the airline said.

All of the passengers have now been accounted for.