EU Calls for Return of Democracy in Egypt 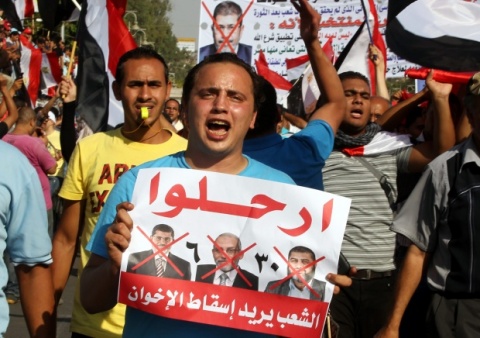 At least 14 people were killed in Egypt in clashes between opponents and supporters of now-overthrown President Mursi and scores have been injured. Photo by EPA/BGNES

Catherine Ashton, the High Representative for Foreign Affairs and Security Policy for the European Union has called for speedy return of democracy in Egypt.

The call came after the country's military overthrew President Mohammed Mursi and suspended the Constitution.

She stressed she was following closely the events in Egypt and was fully aware of the deep rifts in society, of the public's demands for political change, and of the effort to reach compromise.

"I urge all sides to rapidly return to the democratic process, including the holding of free and fair presidential and parliamentary elections and the approval of a constitution, to be done in a fully inclusive manner, so as to permit the country to resume and complete its democratic transition," EU Ashton said in a statement.

She voiced hope the new interim administration would adhere to human rights and rule of law.

"I strongly condemn all violent acts, offer my condolences to the families of the victims, and urge the security forces to do everything in their power to protect the lives and well-being of Egyptian citizens...The EU remains "unequivocally committed to supporting the Egyptian people in their aspirations to democracy and inclusive governance," Ashton said.

At least 14 people were killed in clashes between opponents and supporters of Mursi and scores have been injured, according to local officials.