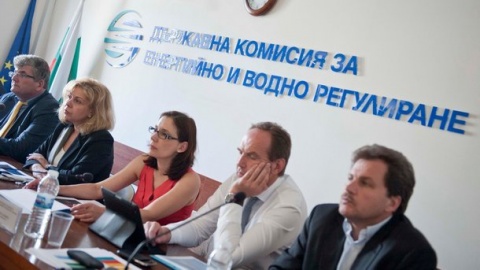 A sitting of Bulgaria's State Commission for Energy and Water Regulation (DKEVR), photo by BGNES

Elenko Bozhkov, member of Bulgaria's State Commission for Energy and Water Regulation (DKEVR), has said that suppressing electricity prices is not likely to result in a sudden price spike in several years' time.

Speaking Tuesday during an energy forum, Bozhkov, as cited by the Bulgarian National Radio (BNR), assured that the energy watchdog had calculated the impact of the Energy Act amendments adopted by Parliament last week on electricity prices for both household and industrial consumers.

The DKEVR member noted that the legal changes aimed at a 5% reduction in electricity prices for the end-consumer "against the backdrop of the danger of a 16% price spike."

Economy and Energy Minister Dragomir Stoynev argued last week that if the Energy Act amendments had not been adopted, electricity prices could have gone up by up to 40%, as producers had requested.

The set of newly adopted Energy Act amendments have neither been promulgated, nor vetoed by President Rosen Plevneliev, with a number of renewable energy associations asking Bulgaria's head of state to block the legal changes, according to reports of dnevnik.bg.

Bozhkov suggested Tuesday that the anticipation of Plevneliev's response to the changes to the Energy Act was among the reasons for the delayed liberalization of the energy market in Bulgaria.

He also said that the energy watchdog had no worries about a potential presidential veto of the legislative package.