2nd Round Table on Election Code Overhaul Held in Bulgaria 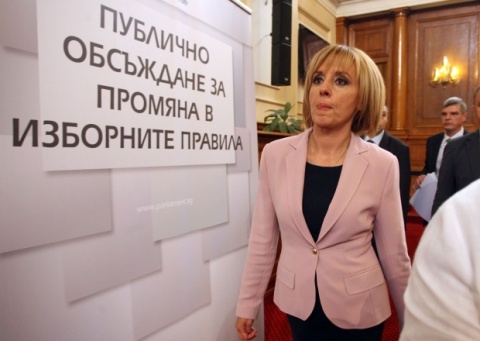 The Deputy Speaker of the Parliament, Maya Manolova, from the Bulgarian Socialist Party, photo by BGNES

Over 70% of the texts in the Election Code must be altered and rewritten, according to the Deputy Speaker of the Bulgarian Parliament, Maya Manolova.

She spoke Tuesday morning before the Bulgarian National Radio, BNR, saying there were hundreds of proposals for legislative changes in the Code, but stressed she did not see any connection between them and holding early general elections.

Later on Tuesday, Manolova, a Member of the Parliament from the Bulgarian Socialist Party, BSP, will chair the second round table with representatives of civic organizations, NGOs, and citizens to hear their proposals for amending the Election Code.

The main issue to be debated is the type of voting system, including majority and preferential vote.

The left wing is proposing to implement electronic voting, to increase until then civil control on the printing of ballots and on the ballot count, to alleviate as much as possible the process of registering to vote and of the actual voting, new rules for electing members of the Central Electoral Commission, (CEC), updating accurately voters' lists, and clear rules for election campaigning, including its reporting in the media.

About 70 people attended the first round table.

Some of their proposals were: incriminating the act of preparing false voting lists; including the methodology of determining election results in the Election Code; CEC making public on its site the code of the software used to calculate the vote; informing citizens how and on what grounds they can submit complaints with the institutions involved in the election process; making CEC a permanent body; publishing all protocols of their meetings on the CEC internet site within 3 days after the meeting; listing the rights and duties of independent monitors in the Election Code; security measures in the printing, storage, and distribution of ballots; a second count of ballots at voting polls where the invalid ones end up being twice more than the average for the country; a definition of political advertisement and disclosing all paid political content in the media; for free of charge time slots for political campaign ads in public media; reinstating the preferential vote; reducing the number of signatures required to register an independent candidate to 3 000 or no more than 1% of the number of voters in the particular region.

Manolova says all proposals will be summarized and included in the legislation.

Last week the round table coincided with the blockade of the Parliament by protesters demanding the resignation of the government and was cancelled due to low attendance.