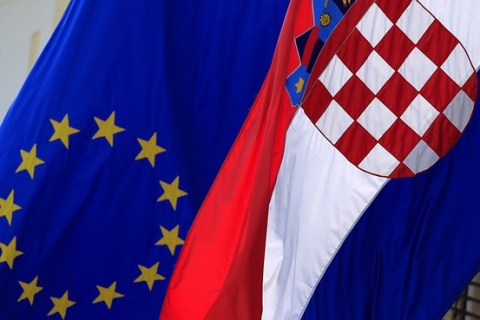 Croatia joins the European Union as its 28th member state on July 1, a decade after applying for membership. File photo

Croatia is to become on Monday the first new member of the European Union club since Bulgaria and Romania joined in 2007.

Forty eight hours before the historic moment, Croatia's Prime Minister Zoran Milanovic was warmly welcomed into the European Union fold by the bloc's 27 heads of state and government.

"It is truly a historic moment for Croatia," said EU president Herman Van Rompuy to a round of applause on the second and final day of a summit in Brussels.

"You've always been European. You are now a full member of our European Union."

The EU is poised to set a date later Friday for Serbia to begin accession talks and Milanovic said "we will do everything and anything to help and assist" Belgrade in its bid to bring its legislation in line with EU standards -- the condition to joining.

"We think that the process should start as soon as possible, last reasonably long but not too long and have the whole process wrapped up," Milanovic added.

"It turns out time and again that life is a journey and not a destination. And it's the bridge that matters not a goal.

"This bridge has been quite long for us," he said, referring to the country's 10-year efforts to join the European club.