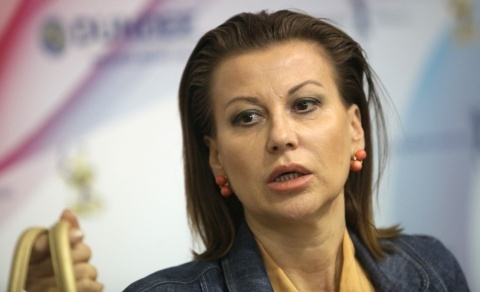 Bulgaria's former rhythmic gymnastics champion and coach, Iliyana Raeva, who set off on a political career earlier this year, officially established her party on Saturday.

The meeting to launch the party was held in in the National Palace of Culture, NDK, in downtown Sofia.

The new party is called United Bulgaria and defines itself as a center-right formation.

"The party will offer what every normal person wants – rule of law, normal living conditions, employment and education for everyone as this is the start in live of every individual," said Raeva.

She informed about the forthcoming establishment of consultative councils to work with all NGOs and tap into their "extraordinary" programs.

The United Bulgaria launch at NDK coincided with the meeting of the Council of the Party of European Socialists, PES, held at the same time and in the same facility, with thousands protesting against the government and the leader of the Bulgarian Socialist party, Sergey Stanishev outside.

The PES leadership is in Sofia at a time their leader Stanishev is facing growing discontent from his own country people and party.

Bulgarian citizens are staging mass protest rallies for the 8th day in a row. They were sparked by the outrageous decision of the government and the Parliament to appoint controversial media mogul and lawmaker Delyan Peevski as Chair of the State Agency for National Security (DANS) with Stanishev seen as one of the masterminds behind the plan.

Demonstrators are demanding the resignation of the government of Prime Minister, Plamen Oresharski, elected on the mandate of the Socialist Party.

Raeva voiced firm support for the protests, saying every normal person would offer such support.

"I am proud to be a Bulgarian, to see that we still keep this undying Bulgarian spirit, which woke up, which stands for what it wants. I believe that protesting Bulgarians will achieve their goals," said she.

Raeva informed in the past week that United Bulgaria was getting wide support from Bulgarian communities all over the world and has the ambition to put an end to the era of dirty politics.

"My aim is to unite Bulgaria. I believe I have the qualities and potential to do that," Raeva said recently, adding that she will not rely on popular faces only to promote the new party.

Bulgaria's rhythmic gymnastics coach Iliyana Raeva unexpectedly submitted her resignation in the middle of September 2012, exactly one month after the final day of 2012 Olympic Games.

The girls, who headed for London to grab gold medals after making spectacular performances at the World Cup tournament, ranked at the disappointing sixth spot in the Olympic finals, saying the pressure was huge and they just could not cope with it.

Raeva however said her decision to drop the curtain on her coaching career, which features many fabulous moments, has nothing to do with the failure at the Olympic Games.

As head of the country's federation, she replaced Maria Gigova, who made it clear she will not run for another term at the prestigious post and who was frequently and harshly criticized by her successor.

Iliana Raeva, herself one of the Golden Girls of Bulgaria that dominated Rhythmic Gymnastics in 1980's, competed in modern rhythmic gymnastics for her country from 1978 to 1982.

She relied on style and artistry, rather than excessively complex moves, with her 1980 ribbon routine to Zorba the Greek and clubs routine to Tchaikovsky's Swan Lake, which remain outstanding examples of the sport.

She was appointed head coach of the Bulgarian national rhythmic gymnastics team in 2008.