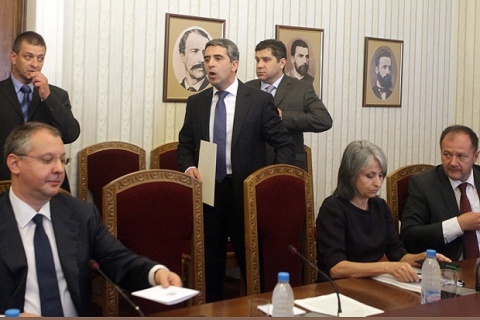 Margarita Popova is pictured here at the sitting of the Bulgarian Consultative Council on National Security (KSNS), which was marred by a shameful scandal, triggered by nationalist leader Volen Siderov. Photo by Sofia Photo Agency

Bulgaria’s vice president Margarita Popova felt sick and was hospitalized during the emergency sitting of the Bulgarian Consultative Council on National Security (KSNS), which was marred by a shameful scandal.

It was not immediately clear whether Popova will have to stay in hospital for a longer period.
The news emerged shortly after the leader of the far-right extremist Ataka party, Volen Siderov, attacked President, Rosen Plevneliev, with a number of accusations, preventing him from officially open the meeting.

Siderov shouted at Plevneliev in demanding answers about allegations that the latter had been involved in offshore dealings and had used the government aircraft to transport Canadian gold mine concessionaire in Bulgaria "Dundee Precious Metals."

"Society must know what is this money you are stuffing in your offshore account," was one of the nationalist's shouts.

The leader of the Citizens for European Development of Bulgaria party, GERB, and former Prime Minister, Boyko Borisov, left the sitting in sign of protest as he was attacked as well.

Siderov accused him of not doing anything during the term of the previous Cabinet to stop western companies from colonizing and robbing the country.

The President made several unsuccessful attempts to calm the extreme nationalist down, and even asked the presidential administration's legal advisers to check if and how Siderov could be removed from the talks.

The nationalist kept shouting that he was a free citizen and leader of a parliamentary group with immunity.

The leaders of the Bulgarian Socialist Party, BSP, Sergey Stanishev, and of the predominantly ethnic Turkish Movement for Rights and Freedoms, DPS, Lyutvi Mestan, stood silent, looking in the other direction, prompting media and social network commentaries on how far they are willing to go and how much humiliation they can endure to stay in power.

Stanishev interfered only to ask Plevneliev to ban the media from the sitting as, according to him, they were feeding Siderov's desire for drama.

Plevneliev called for a 15-minute break.

It was reported meanwhile that the KSNS participants are making a second attempt to start the talks - without Borisov, who said he was not coming back, and the media, who were ordered to clear the room.

This is the latest scandal and provocation coming from Siderov on the backdrop of mass and relentless anti-government protests in the country, initially sparked by the outrageous election of controversial media mogul and lawmaker from DPS, Delyan Peevski, to lead the National Security Agency, DANS.