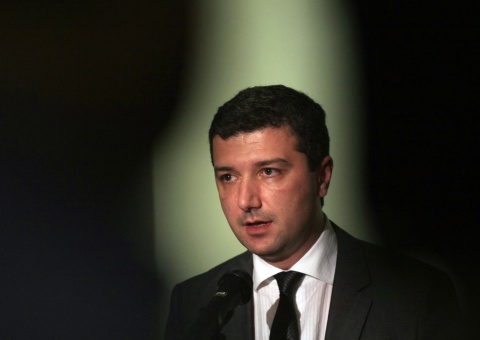 Dragomir Stoynev, Minister of Economy and Energy, photo by BGNES

Dragomir Stoynev, Minister of Economy and Energy, has backed the forecast of Prime Minister Plamen Oresharski that the country will be plagued by chaos if Bulgaria's socialist-led government resigns.

In a Thursday interview for the morning broadcast of bTV, Stoynev made clear that the set of urgent social and economic measures presented in Parliament on Wednesday by Oresharski were not aimed at appeasing protesters but were essential for Bulgaria's survival over the next few months.

He suggested that Bulgaria's economy was stifled by intercompany indebtedness, adding that this could lead to serious problems such as a power supply disruptions.

"A power supply regime is quite likely. All state-owned companies are indebted – if they start going bankrupt one after the other, naturally, this is a possible scenario," Stoynev stated.

He suggested that public companies had been deliberately drained over the past few years through fake contracts for repair works and purchases of equipment.

To illustrate his point, he noted that miners at the Maritsa Iztok Mines did not have enough excavators to work.