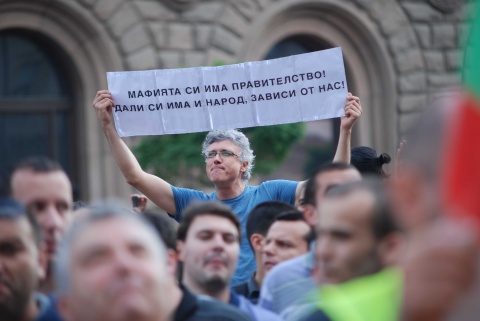 A protestor carries a banner, reading “Bulgaria’s mafia has its own government. Whether they own the people too or not – it is up to us to decide” at the rally on Friday evening in Sofia. Photo by Sofia Photo Agency

New protest rallies are planned Saturday evening in Bulgaria against the election of a controversial young MP as security chief even though he claims he is ready to step down.

The protest in Sofia Saturday evening will be held once again in front of the Council of Ministers.

More than 63 000 people have signed the rally Facebook page so far, saying they will join the protests scheduled for 18.30 in the bigger cities.

Just hours earlier on Saturday Delyan Peevski, a controversial media tycoon and member of parliament from the ethnic Turkish party, sent a letter to all media in Bulgaria to announce he was ready to withdraw from the post of Head of Bulgaria's State Agency for National Security (DANS).

"I accepted to carry out the duties of DANS Head on behalf of Bulgarian citizens. Again on their behalf, I am ready to accept a decision of the 42nd General Assembly to revoke my election. This act is a show of our shared responsibility – mine, of Prime Minister, Plamen Oresharski, and the leaders of the Bulgarian Socialist Party, BSP, and of the Movement for Rights and Freedoms, DPS, Sergey Stanishev and Lyutvi Mestan," Peevski writes in the letter.

He criticized it strongly and urged the parliament to "immediately" retract its decision.

Speaking on public TV Friday evening, the President reiterated his outrage from the move and confirmed he has lifted his trust from the Cabinet "Oresharski."