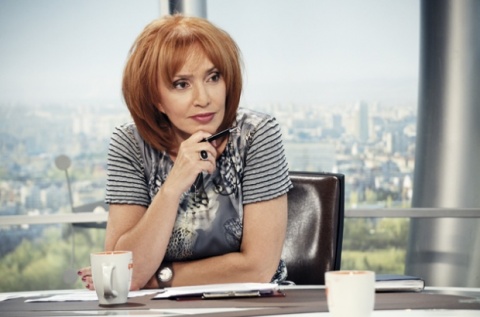 Popular, though often controversial Bulgarian TV talk show host, Lyuba Kulezich, has been attacked and thrashed by an unknown assailant in the capital Sofia.

The incident has happened Friday evening, around 8 pm, on Tsar Boris III Boulevard in the Krasno Selo district.

The journalist has been attacked from the back. A man pushed her to the ground and began kicking her, but fled when she started screaming, attracting attention of passerby. The assailant never reached for her pocketbook, she says.

Kulezich believes this has been a staged attack, rather than an incident. She says she had received threats and warnings numerous times.

She checked into the emergency Pirogov hospital where she was treated and later released.

Despite the apparent bruises on her face, the journalist still hosted her Saturday morning talk show on Nova TV.

"The thrashing last night was a message – it aimed at humiliating me and crushing me, not at disfiguring me. I was attacked not because I am that brave, but because I am fair and relentless in my pursuit of the truth. No one will manage to close my mouth," she said at the beginning of the broadcast.

Before recently taking a job with Nova TV host, Kulezich was fired from TV7 by its Director, Nikolay Barekov, on grounds she failed to give protesting Bulgarians enough time on air and was instead favoring politicians from the formerly-ruling center-right Citizens for European Development of Bulgaria party, GERB, and namely former Interior Minister in the GERB Cabinet, Tsvetan Tsvetanov.

After the resignation of Prime Minister, Boyko Borisov, and his government in February, in the aftermath of mass protest rallies against poverty, stagnation, and corruption, from strong supporter of the former PM and of GERB, TV7 turned virulently critical to them.

TV7 is also linked to controversial businessman and MP Delyan Peevski, whose election one day ago as the new head of Bulgaria's State Agency for National Security (DANS), stirred widespread outrage and protest rallies.

However, many in Bulgaria also see Kulezich as biased and a blind supporter of GERB.