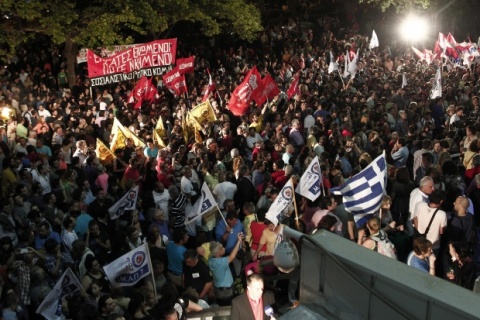 Riot police have been deployed in Athens as thousands of people have gathered outside ERT's headquarters to protest against the decision. Photo by EPA/BGNES

The Athens Journalists' Union has called a 48-hour strike to protest against the closure of the public Hellenic Broadcasting Corporation (ERT), which surprised and shocked on Tuesday evening both viewers and journalists.

"This is a blow to democracy," said ERT newsreader Antonis Alafogiorgos at the end of the main TV station's final broadcast.

"I am now a laid-off single mother with a young child," she said. "How exactly is this country protecting me? Why are they leaving me without work?"

“We gave our lives, our souls for the public station. We spent nights that we’ll never get paid for. We work hard here and have not been paid since November. All the effort is gone, wasted. They are throwing us aside, just like that, it is a disgrace,” a female journalist from the TV channel told BBC.

ERT, which began broadcasting in 1938, is funded by a direct payment of EUR 4.30 added monthly to electricity bills.