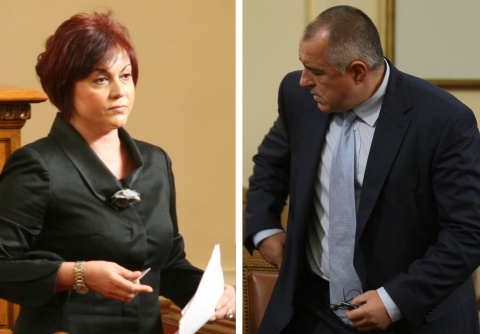 The Bulgarian Socialists have condemned the behavior of the formerly-ruling GERB party and them leaving plenary hall, labeling it destructive and irresponsible.

The Member of the Parliament from the Bulgarian Socialist Party, BSP, Korneliya Ninova, read a declaration on behalf of her parliamentary group, pledging the Socialists, the liberal ethnic Turkish Movement for Rights and Freedoms, DPS, and the far-right nationalist Ataka would work for the better future of Bulgaria and would achieve it without the center-right Citizens for European Development of Bulgaria party, GERB.

"We do not need them. It must be painful for GERB, because it is all over. Lobbyist and anti-constitutional legislation, crushing institutions, racket of businesses – it is all over," said she.

Ninova accused former Prime Minister and GERB leader, Boyko Borisov, of bragging he had won the May 12 early general elections and then cowardly leaving the sitting. She added GERB were trying to prove their leader's idea from the time of the previous General Assembly that MPs were just bums, hanging in the Parliament's coffee shop.

The Socialist functionary stated BSP was not issuing verdicts, as the real verdict has been delivered by voters on Election Day since they were the ones to sent GERB in isolation.

According to her, her party had information about individuals from GERB pressuring State servants to sign petitions to have the vote results void and forcing them to attend rallies in their support.

"Stop harassing people and stop threatening the other parliamentary represented parties – it won't help you, nor will it prevent us from doing our job – to assist the poor, the unemployed and the private companies in order to guarantee economic growth," Ninova stressed.

Earlier Thursday, GERB MPs, led by Borisov, left the sitting. He declared that they will show up in the Parliament, but will not register to vote and/or participate in debates and will continue to criticize before the media the work of the 42nd General Assembly from the hallways.