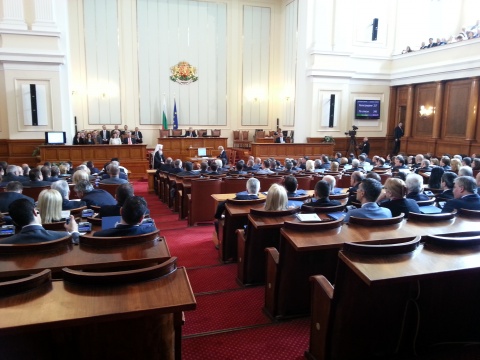 The parliamentary group of the center-right Citizens for European Development of Bulgaria, GERB, party refused to appoint its representatives to the ad-hoc committee for preparing the rules of organization and procedure of the new Parliament.

The ad-hoc committee tasked with drafting Parliament's rules of procedure is usually the first parliamentary body to be created after the new Parliament convenes, according to reports of dnevnik.bg.

Bulgaria's 42nd National Assembly held its inaugural sitting on May 21.

According to the final vote count of the May 12 elections, GERB together with the nationalist party Ataka have 120 seats, and DPS and BSP – another 120 in the 240-seats unicameral Parliament.

The Bulgarian Socialist Party, BSP, and the ethnic Turkish Movement for Rights and Freedoms, DPS, party argued Tuesday that the committee be formed on a parity basis with an equal number of representatives from each parliamentary group.

The GERB party, however, opposed the suggestion, insisting that the number of representatives in the committee be determined by the size of parliamentary groups.

As an act of protest, GERB refused to nominate representatives in the committee and the panel included members of BSP, DPS, and Ataka.

The composition of the ad-hoc committee was approved Wednesday by 77 MPs form BSP, 35 from DPS and 15 from Ataka.

The result was applauded by GERB and Boyko Borisov, former Prime Minister and leader of the center-right party, who left the Parliamentary Hall straight after the vote, told journalists as he passed by "Here's your three-way coalition."

BSP MP Maya Manolova was appointed Chair of the ad-hoc committee tasked with drafting the rules of organization and procedure of the new Parliament, the other members of the panel being Mladen Cherveniakov and Yanaki Stoilov form BSP, Hristo Biserov, Hamid Hamid and Kamen Kostadinov from DPS, and Yavor Notev, Pavel Shopov and Petar Petrov from Ataka.