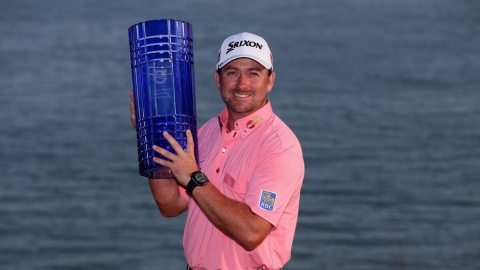 As Bulgaria successfully made its golf debut on the European Tour, the winner – Graeme McDowell of Northern Ireland – praised the picturesque seaside course Thracian Cliffs and its breathtaking views.

“It’s a magnificent golf course at the Thracian Cliffs with a great crowd and I hope we gave the Bulgarians a little taste of what we do,” McDowell said after sealing his victory against Thailand’s Thongchai Jaidee.

“This was a fantastic week for me.”

“I’m very excited because it’s a massive event and it was hugely disappointing to lose the final last year,” said McDowell, who was beaten by Belgium’s Nicolas Colsaerts in 2012.

"We have talked all week about the prestige of this event and how many great champions have won this tournament, and it's just nice to add my name to that list of legends."

Graeme McDowell became on Sunday the first Irish winner of the Volvo World Match Play Championship defeating Thailand's Thongchai Jaidee 2 and 1 in the final on the Thracian Cliffs course in Bulgaria.

That was a hard-fought victory for the former US Open champion, who had to fight back from 2 down after four holes and did not get in front of his 43-year old opponent until the 14th hole before securing victory at the 17th.

It is McDowell's second win in three events after he also captured the PGA Tour's RBC Heritage earlier this month at Hilton Head in South Carolina.

He joins a distinguished list of winners on the trophy which includes the likes of Seve Ballesteros, Jack Nicklaus, Arnold Palmer, Nick Faldo and Ernie Els.

The European Golf Tour took place from May 16-19, 2013 at Thracian Cliffs, which has been hailed as Bulgaria's version of the famous American coastal course Pebble Beach.

This was the first time that Bulgaria hosted a full European Tour event, part of a drive to break new ground in the largely untapped golfing market of Eastern Europe.

Even though Bulgaria doesn't have a player ranked in the world's top 1,500 professionals, it managed to attract car manufacturer Volvo as a sponsor.