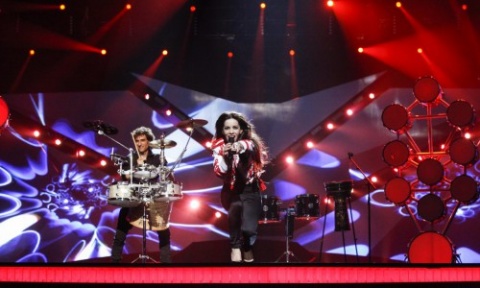 The drumming duo Elitsa and Stoyan Yankulov-Stundzhi represented Bulgaria at the Eurovision Song Contest, six years after winning the hearts of millions of viewers around Europe. Photo by BNT

The song 'Only Champions' of Bulgarian drumming duo Elitsa and Stoyan Yankulov-Stundzhi failed to make it to the Eurovision finals.

The second semi-final was held Thursday evening in Malmo, Sweden, and was aired live by the Bulgarian National Television, BNT.

Representatives of Hungary, Azerbaijan, Georgia, Romania, Norway, Iceland, Armenia, Finland, Malta, and Greece, all qualified for the final, which is scheduled for Saturday, May 18.

Sweden qualifies automatically as it hosts the event, along with the Big Five – Germany, Spain, Great Britain, France and Italy. The winner will be selected by a professional jury and spectators' vote.

The 2013 Eurovision song contest is taking place in Sweden, following the victory of Loreen in Azerbaijan last year.

Bulgaria has participated in the Eurovision Song Contest eight times since its debut in 2005, but it was only the same duo - Elitsa and Stundzhi - who brought success to the country and reached the finals in 2007.

Bulgaria's song Water grabbed the fifth spot at Eurovision final in Helsinki in May 2007, while another Balkan country - Serbia came in first.

Bulgarians were awarded the maximum 12 points from neighborliness Greece, while Cyprus and Spain placed us second with 10 points from each country. Macedonia placed Water 3rd, with 8 points.

After the initial excitement over their participation in the contest many Bulgarians already consider the Eurovision experience to be either sloppy or dire, a competition decided mainly by political back-scratching.

Still amidst a period of effacement and chalga-risation of Bulgarian music, the intensity of Bulgaria's duo Elitsa and Stundzhi six years ago convinced many that the music jamboree still matters, at least as a medium of the traditional and authentic on a modern note.