Ian Poulter in Bulgaria: I Have Never Seen a Course Like That 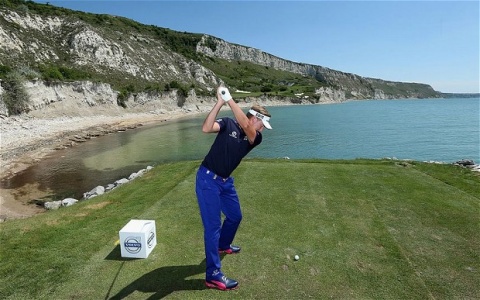 Famous English golfer Ian Poulter plays in the pro-am ahead of the Volvo World Matchplay at Thracian Cliffs, Bulgaria. Photo by Getty Images

As Bulgaria makes its debut on the European Tour, famous English golfer Ian Poulter admitted has been taken aback by the picturesque seaside course Thracian Cliffs and its breathtaking views.

"I don't think I have ever seen any course like this and I'm wracking my brain trying to think if I've ever played a course like this, and I just can't think of one," said Poulter on Wednesday, before the tournament kicked off.

"It's been called the `Pebble Beach of Europe' but there is only a few holes at Pebble Beach where you play along the shoreline, whereas here at Thracian Cliffs holes 3 to 10 are perched right on the cliff edge.It's an incredible piece of real estate and it's going to look amazing on TV which is good for the European Tour."

The Englishman is one of 24 competing at Thracian Cliffs and will face off on Thursay Thailand’s Thongchai Jaidee in the first of the round-robin group matches.

“I’m not overly happy with my performance the last couple of weeks,” Poulter admitted. “I think it’s good timing. I have had two poor weeks.

“I’m a confident person. I would expect to put myself under pressure this week to go out there and play well. It’s match play. I love the format, and I just think it’s come at the right time of year for me.”

The European Golf Tour will take place from May 16-19, 2013 at Thracian Cliffs, which has been hailed as Bulgaria's version of the famous American coastal course Pebble Beach.

This will be the first time that Bulgaria will host a full European Tour event, part of a drive to break new ground in the largely untapped golfing market of Eastern Europe.

Even though Bulgaria doesn't have a player ranked in the world's top 1,500 professionals, it has managed to attract car manufacturer Volvo as a sponsor.