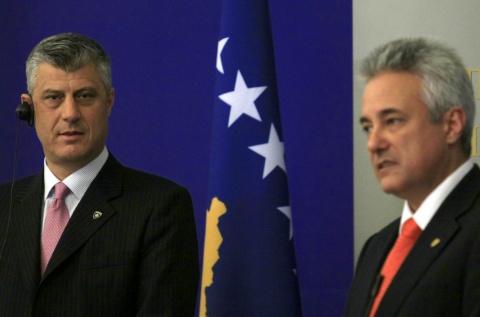 Speaking after a meeting with Kosovo's Prime Minister Hashim Thaci, Bulgarian caretaker Prime Minister Marin Raykov emphasized the importance of Kosovo for the EU integration of the region.

Thaci arrived Wednesday in Sofia on a one-day working visit.

"The agreement on the normalization of relations between Pristina and Belgrade signed in April gives us hope for the future of both countries in the EU," Raykov stated, according to reports of the government's press office, as cited by dnevnik.bg.

He went on to express Bulgaria's firm support for the launch of talks between Kosovo and the European Commission on the signing of a Stabilisation and Association Agreement.

"Kosovo's main goal is to join European and Euro-Atlantic structures as fast as possible, at the same time building good neighborly relations with all countries in the region," Thaci pointed out.

The two Prime Ministers agreed on the signing of a memorandum of cooperation in the sphere of EU integration between Kosovo and Bulgaria.

"As an EU Member State, Bulgaria has a duty to assist the fulfillment of the European perspective for the Western Balkan countries," Raykov declared.

Thaci and Raykov also discussed opportunities for boosting bilateral trade from the current rate of EUR 40 B by improving infrastructure.