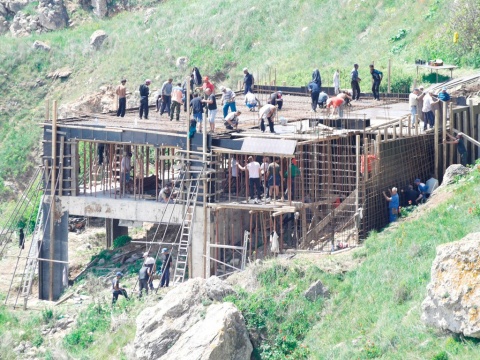 This photo of construction going on in the Yaylata archaeological protected area has been circulating Bulgarian social networks over the weekend.

Environmentalists in Bulgaria have alarmed of scandalous illegal construction going on in a protected archaeology site on Bulgaria's Black Sea coast right as Bulgarians go to the polls for parliament Sunday.

The reports - which are documented with photos - say that rapid construction of a massive building is under way in the Yaylata archaeological reserve near the village of Kamen Bryag on Bulgaria's northern Black Sea coast.

Yaylata is home to over 100 cave dwellings from around 4,000 BC, as well as remnants from a Thracian settlement and a Byzantine fortress.

According to reports by citizens who observed the construction under way, the site is labelled as having a permit for "Reconstruction of a roof and masonry of a fisherman's hut."

Large numbers of workers and burly men, known in Bulgaria as mutri, were observed at the site, with the sturcure quickly growing.

Citizens first observed the site Friday; the picture above is dated Saturday.

The regional environmental agency unit in Varna (RIOSV) has been alerted of the case.