How Bulgaria Saved Its Jews from Nazi Concentration Camps 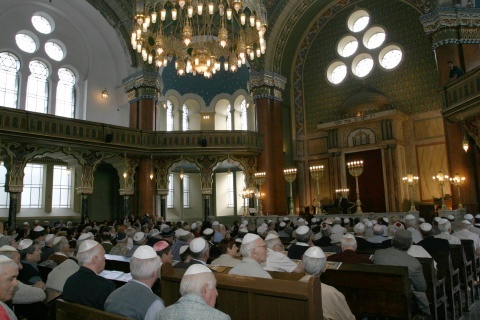 When Nazi Germany began murdering Europe's Jews during World War II, the public did little to stop it. Citizens of France, Italy, Holland and Poland, for example, did not flood the streets in outrage when their neighbors were shipped to concentration camps.

But 70 years ago, one nation protested: Bulgaria, the only Eastern European country that kept much of its Jewish population from the gas chambers and crematoria.

"We have an example of the power of the common man to stop genocide," said Jacky Comforty, director of "The Optimists," a 2001 documentary about how Bulgaria foiled Adolf Hitler's minions. "It's such a unique story, we can inspire people to stand up for what is right everywhere."

Comforty screened "The Optimists" in select American cities this spring to commemorate the 70th anniversary of rallies across Bulgaria in March 1943 that helped persuade the government to prevent the mass killing of the country's 48,000 Jews, despite its alliance with the Third Reich. The film, which takes its name from a jazz combo founded by a Bulgarian Jew whose Christian friends prevented his deportation, was shown at the Organization of American States in Washington in March.

Born in Israel to Bulgarian Jewish parents, Comforty, 58, knew little of how the Holocaust affected his family's native country before he began interviewing his parents in 1984. He learned that, while spared the horrors of Auschwitz and Treblinka, his father, like many Jewish men, served in a forced labor camp under armed guard within Bulgaria's borders during the war.

"I knew where my parents came from, but I never heard any Holocaust stories," Comforty said in an interview.

"The Optimists" includes photographs of Bulgarian forced labor camps, where young men listened to swing records and performed opera when not widening train tracks for the Nazis. "I'd heard sort of fun stories of young people in labor camps, but there was no real context," Comforty said.

As in other parts of Europe, restrictions on Jewish movement tightened as the war went on. In early 1943, Bulgaria signed a secret accord to ship 20,000 Jews to Nazi concentration camps in occupied Poland. Deportations were to begin on March 10.

But when transport trains rolled into the country, people spoke up. Comforty interviews Bulgarian Gentiles, including a baker who hid Jews from police raids in his shop's ovens and a bishop who, like other Christian clergymen and members of parliament, battled the Nazis.

"If we, the church, allow the Jews to be deported, we will betray our most sacred obligations," the Rev. Boris Haralampiev, a bishop who died in 1990, says in the film. "We must help!" A withered, white-bearded man in a tall Ottoman hat, as a younger priest Haralampiev contacted Bishop Metropolitan Kiril of Plovdiv, a larger city, to coordinate resistance to the deportation order. According to some accounts, Kiril stood in front of the transport train in Plovdiv to keep it from starting its journey to the concentration camps.

Ralph Petroff, a technology entrepreneur, was at the D.C. screening of "The Optimists." He said his grandfather, Dimtar Petroff, was one of Kiril's priests who forged baptismal certificates for more than 1,000 Jews in Plovdiv so they could avoid deportation.

Why was Bulgaria, a nation whose population was a 10th the size of Germany's, able to resist the racist ideology that captivated much of Europe in the first half of the 20th century? Comforty said that, after millennia of peaceful co-existence with Jews and 500 years of oppression by Turks, Bulgarians just weren't buying the hate Hitler was selling.

"It's really hard for somebody to come in from the outside with Nazi theory and try to impose it on them," said Comforty, who pointed out that Jews have lived in Bulgaria for centuries.. "They were there long before the Bulgarians came," he said.

Produced for about million — half of which, Comforty estimated, he bankrolled himself in an effort he likened to "building a few Eiffel Towers" — "The Optimists" includes interviews with the director's mother, Ika Ovadia-Comforty.

During the war, Ovadia-Comforty and three other Jewish women attended a school that was not legally permitted to admit Jews. In the film, she recalls officials visiting the school to identify Jews by measuring students' heads according to principles of Nazi racial science.

According to Ovadia-Comforty, among 40 women, the officers found four Jews — who were not Jewish.

"It was terribly funny and very, very unscientific," said Ovadia-Comforty, who died in Israel in 2011. "I am an Aryan, by Hitler's measurements."

"The example of the racial exam — it's a nice way to make fun of the racial theory but shows the racial diversity" in Bulgaria, Comforty said. "Bulgarians look more Jewish than Jews themselves."

One scholar interviewed in "The Optimists" floats a controversial thesis: By allying itself with Germany and avoiding the disastrous occupation that destroyed countries such as Poland, Bulgaria was in a better position to save its Jews. Comforty said this is only one idea his documentary puts forward.

"It definitely had something to it, but I would not take it as the only thing," he said. "If Bulgaria was occupied, I wouldn't be talking to you now."

Despite the good works documented in "The Optimists," all did not end well for Bulgarian Jews. Comforty estimated that 90 percent of the nation's surviving Jews left the country after the war. Meanwhile, not every Jew was saved — about 11,000 living in Bulgarian-occupied territories such as Greece and Macedonia ended up in death camps.

In fact, even as Bulgaria marked the 70th anniversary of the protests against the Nazis this spring, Macedonia called for the nation to apologize for its role in the deportation of its Jewish population.

Nor is Bulgaria free of ethnic tension today. The country's impoverished Roma, who live in ghettoes, remain a disadvantaged underclass, and the nation was swept by anti-poverty demonstrations that deposed its center-right government in February.

"It's an uphill effort," Bulgarian Ambassador Elena B. Poptodorova said in an interview. "Until there is an improvement in the overall economic situation in the country, it will be hard to meaningfully and lastingly incorporate the Roma population."

Still, Comforty wants to spread the story of the good works that were done — and destroy the myth that any one person or group was responsible. As a satellite state of the Soviet Union, Bulgaria was ruled by communists until 1990, and the party often took credit for rescuing the Jews during World War II.

"The intention was to show this truly unique act as totally carried out by the Communist Party," said Poptodorova. "This is why people from my generation had to learn new things after 1989 of the crucial role of civil society."

Comforty says that in his parents' country, the hard work was not done by heroes like Oskar Schindler — the German industrialist who employed Jews during the war and who was later celebrated by the Steven Spielberg film "Schindler's List" — but by neighbors.

"By searching for a Bulgarian Schindler that does not exist, it takes away from real people," Comforty said.

"There are not many inspiring tales of the Holocaust," said Petroff, the entrepreneur who saw the film. "I think this is the most inspiring."