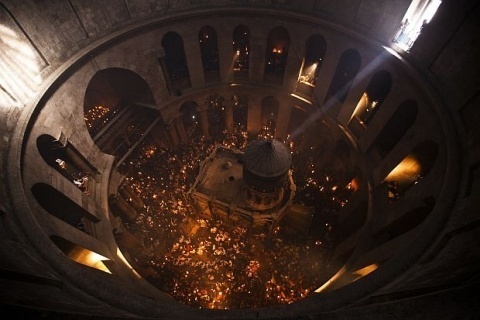 The Church of the Holy Sepulchre, where the Holy Fire descends upon Jerusalem on Easter. Photo by Reuters/DarikNews.bg

Millions of Orthodox Christians around the world, including in Bulgaria, are celebrating the greatest Christian holiday, Easter, the resurrection of Christ.

Bulgarian worshippers flocked to churches Saturday night to hear the Holy Mass that celebrates the coming of Easter.

At midnight sharp, when the mass was over, as is the ritual, the believers go around the church three times, with their candles burning.

There is a belief that if you have been a good Christian, your candle will not go out no matter how strong the wind might be, because you have no sins.

After all church ceremonies are over, or on the next morning Bulgarians gather around, exchange their colored eggs and carry out the ritual of cracking them.

On Easter people great each other with "Christ Is Risen" while the reply is: "He Is Indeed Risen."

On Sunday, all eparchies in Bulgaria serve the so-called "Second Resurrection" mass.

The mass at the Sveta Nedeliya Cathedral in Sofia is to be led for the first time by newly elected Patriarch Neofit.