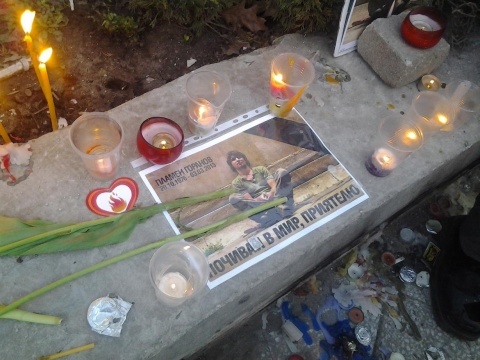 Vigil for Bulgaria's "Jan Palah" will be held in five cities, file photo by BGNES

Bulgarians in five cities are holding vigils Friday in honor of the young man who fatally set himself on fire in Varna in February to protest against the links between the city council and the mafia.

The Facebook organizers have written: "Let's remember all who sacrificed their lives for us - common people. All politicians should ask themselves why Plamen died."

The vigils in Varna, Burgas, Shumen, Ruse, and Sofia start at 6 pm. Organizers call on everyone who cares about Plamen's sacrifice to light a candle in his memory.

Plamen Goranov, 36, took the drastic action on February 20, amid a wave of massive protests across the country against poverty, economic stagnation and corruption, which led to the resignation of the GERB party Cabinet of Prime Minister, Boyko Borisov.

In addition to demanding the resignation of fourth-term Varna Mayor, Kiril Yordanov, Plamen was one of the few to explicitly blame shady TIM business group, centered in Varna, for the dire situation in the country and in the north-east in particular.

Bulgarians, especially those on social networks, have called him a martyr of the protests in comparing him with Czech student, Jan Palach.

It was reported meanwhile that the man, who set himself on fire in front of a retail store in the Bulgarian mountain town of Smolyan early on Wednesday, remains in critical condition.

It has emerged that he had personal motives and was desperate over a recent divorce.

Bulgaria has witnessed an unprecedented wave of self-immolations recently, with at least seven people setting themselves on fire since mid-February. Five of them passed away.