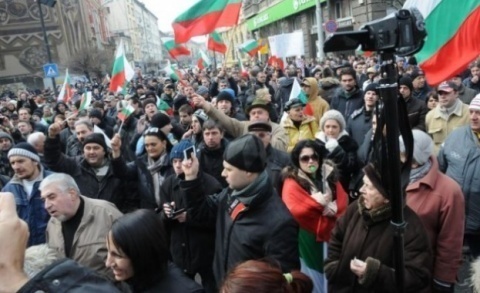 Bulgaria has seen two months of protests against energy monopolies. Photo by BGNES

Two fresh protests against energy and other monopolies in Bulgaria are taking place Sunday in the capital Sofia.

One of them starts at 11 am under the motto "The People against Oligarchs," and is organized by the People's Social Movement. The participants are gathering in the vicinity of the Ministry of Economy and Energy to march in downtown Sofia to the building of the Office of the President.

Their main demands include immediately putting into operation Units 3 and 4 of the Kozloduy Nuclear Power Plant, nationalizing the power distributors, moratorium on legal cases filed by power and heating utilities against citizens who could / can't not afford to pay their bills, annulling the concessions for gold mines' exploitation, and halting the privatization of the State-owned Bulgarian Railways, BDZ, and the VMZ Sopot military plant.

At the same time, the far-right nationalist VMRO party is organizing a protest under the slogan "Riot." Protesters will gather in front of the main courthouse in Sofia, form where they will head to the square between the buildings of the Office of the President and of the Council of Ministries.

Bulgaria saw recently two months of mass protests against energy monopolies, with some of demonstrators demanding the nationalization of the power distributors in the country.

It was revealed in the aftermath that the prosecution in Bulgaria has requested the revocation of the license of Czech power utility CEZ over massive regulatory breaches.