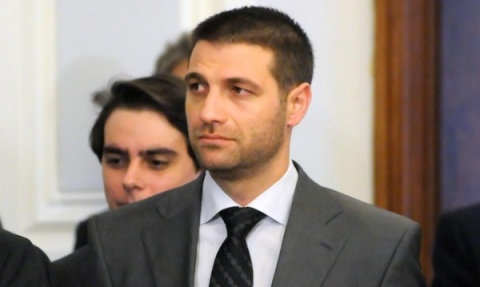 Caretaker Transport Minister, Kristian Krastev, wants to be remembered as a man who had done a great job, and not only as the "playboy of the interim Cabinet." Photo by BGNES

If there are no serious bids for the privatization of the troubled Bulgarian State Railways company, BDZ Holding, the Privatization Agency could cancel it.

The statement was made Saturday by caretaker Transport Minister, Kristian Krastev, speaking for bTV.

He said the privatization was just one of the options for rescuing the company.

The Minister reported he had "resurrected" the dialogue with creditors and BDZ workers in setting on the path to salvage and stabilize the railways. He stressed he would back the privatization of the cargo unit only if it could be sold at a reasonable price to eliminate part of the debt, but was against "privatization at all costs."

Krastev informed the government was also working on a scenario that would involve a loan from the World Bank.

The deadline for companies to submit their bids for the privatization of BDZ Holding, expired on Friday, March 29.

At the beginning of February, the Sofia City Court ordered a freeze of 100% of the assets of the cargo unit of the company.

In the TV interview Saturday, Krastev stated the overall goal of the caretaker Cabinet was stability and smooth transition to the next one to be elected on May 12, in the snap vote that was imposed by the resignation of Prime Minister, Boyko Borisov and the government of his Citizens for European Development of Bulgaria party, GERB.

Krastev is also said to have the best looks among senior officials in the country. When asked by the host if these good looks helped him in the job, he replied he did not want to be remembered only as the "playboy of the caretaker Cabinet," but as a man who had done a great job.