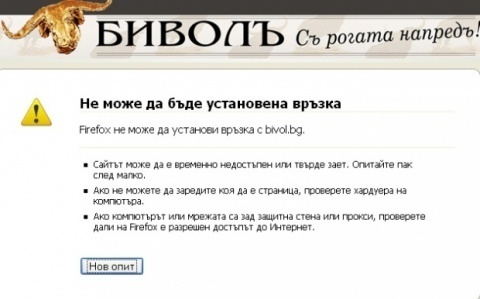 After publishing the notorious “Buddha” file, the Bulgarian site for investigative journalism Bivol was subjected to hacker attacks. File photo

Bulgaria's Prosecutor's Office has officially denied it was probing investigative journalists Atanas Tchobanov and Assen Yordanov from the site Bivol.bg.

Bulgarian independent MEP, Slavi Binev, was the first one to officially announce Bulgarian secret services were spying on journalists.

Tchobanov and Yordanov asked in a letter Bulgarian caretaker Prime Minister, Marin Raykov, caretaker Interior Minister, Petya Parvanova, Chief Prosecutor, Sotir Tsatsarov, and the Chief of the National Agency for State Security, DANS, Konstantin Kazakov, to provide information if it was true the secret services were snooping around them in a case codenamed "Buddhali" and if there is such case, when was it launched, on what legal grounds, on whose order, and what is its goal.

A week ago, Bivol, dubbed the Bulgarian WikiLeaks and the most successful WikiLeaks copycat, received a letter signed by the Press Office of the Supreme Prosecutor's Office of Cassations, stating that according to the "instruction for filing documentation at the Prosecution of Republic of Bulgaria, when there is registration of documents pertaining to a case that has been already launched, the filing employee should record the registration number and index of the original file and the date of registration of the newly formed file."

A follow-up check of the site of the Prosecutor's Office revealed the so-called "already-launched" case has been decided on and logged by the Supreme Prosecutor's Office of Cassations on February 18, 2013, (two days before the resignation of Prime Minister Boyko Borisov), and has been sent to the "competent authorities," which was largely interpreted as proof about the existence of the surveillance case "Buddhali."

After keeping silent for 10 days, the Prosecutor's Office has sent an official letter to Bivol, explaining the inquiry about the Buddhali case has been wrongly attached to a different complaint signed by Atanas Tchobanov, pertaining to online threats against him.

The letter further informs the threats are being investigated by the Main Directorate for Combatting Organized Crime, GDBOP.

It letter concludes that the Office of the Prosecutor does not have the authority to check if journalists have been spied on.

The statement raised a number of eyebrows as at the same time the Chief Prosecutor ordered a probe in allegations that a number of politicians and wealthy businessmen have been illegally wiretapped.