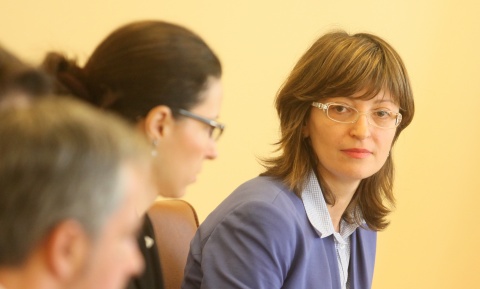 Ekaterina Zaharieva, Bulgaria's caretaker Deputy Prime Minister and Minister of Regional Development and Public Works, has outlined regular payments under public procurement deals and projects financed under operational programs as a main priority in her work.

Zaharieva, as cited by the press office of the Ministry of Regional Development and public Works, said during a meeting of the Management Board of the Bulgarian Construction Chamber on Wednesday that public procurement deals and EU-funded projects would be the main source of contracts for construction companies in the next 2-3 years.

The participants in the meeting discussed opportunities for streamlining the public procurement system first and foremost by curbing discriminatory tender criteria.

Construction companies argued that the introduction of electronic tendering would reduce the impact of subjective factors, while the creation of electronic records for large construction projects would boost transparency and accountability in the implementation of projects.

Zaharieva agreed that it was important to start work on the introduction of electronic records.

She went on to say that the efforts would also concentrate on drafting a common program for increasing the energy efficiency of all industrial, public and residential buildings in the country.

Bulgaria's caretaker Regional Development Minister emphasized that the swift implementation of energy efficiency measures would not only reduce expenses but also improve the condition of buildings and generate employment at small and medium-sized companies.