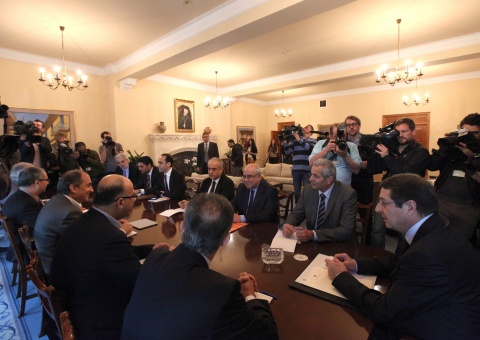 Cypriot President Nicos Anastasiades (R) presides over a meeting with leaders of political parties about the country`s rejection to a proposed levy on bank deposits, at the presidential palace in Nicosia, Cyprus, 20 March 2013. Photo by EPA/BGNES

Political leaders in Cyprus are meeting for emergency talks after its parliament overwhelmingly rejected an international bailout deal.

Cypriot President Nicos Anastasiades is meeting party leaders to hammer out a Plan B after a one-off tax on savings failed to get the support of any MPs.

President Anastasiades is holding the emergency meeting of party leaders and the central bank governor in Nicosia to "examine alternative plans to address the situation that may arise following... the parliamentary vote", his office said, as cited by BBC.

Anastasiades, who was elected to the presidency on 24 February, will also hold a cabinet meeting and talks with the European Union, European Central Bank and International Monetary Fund (IMF).

Germany says banks in Cyprus may never reopen if a bailout is not agreed.

Banks in Cyprus have been shut until Thursday to prevent mass withdrawals. The stock exchange remains closed.