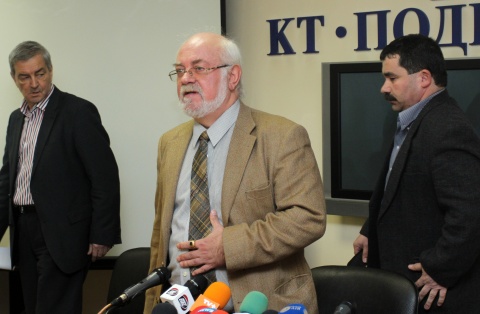 Bulgaria’s “Podkrepa” Labor Confederation presented a set of urgent measures in the social security sphere at a press conference on Tuesday. Photo by BGNES

Bulgaria's "Podkrepa" Labor Confederation has proposed an increase in child benefits for children of up to 2 years of age from the rate of BGN 240 per month to the current level of the minimum monthly wage, BGN 310.

The trade union has prepared a set of urgent measures in the social security sphere which can be implemented without adopting legal amendments and are expected to give a boost to the economy, according to reports of the Bulgarian Telegraph Agency (BTA).

One of Podkrepa's proposals involves increasing the minimum monthly wage to a level of BGN 330 – 340 from the current BGN 310.

The trade union argues that the minimum wage hike will not put a significant burden the budget because around 130 000 people in the country are paid minimum wage, with 100 000 of them working in the real sector.

Podkrepa's list of proposals also includes the introduction of criteria for energy poverty.

The paper defines energy poverty as the situation when low-income households spend 10% or more of after-tax income on household energy bills.

Podkrepa insists that the households which belong to this group should receive a one-time payment for the winter season.

The fourth proposal of the trade union involves improving the work of the National Council for Tripartite Cooperation by boosting transparency.

Podkrepa calls for publishing minutes of meetings of the NCTC and live streaming of meetings on the Council's website.

The trade union also insists that decisions of the NCTC passed with a 2/3 majority should be made mandatory.

CITUB said that the step would require a total of BGN 350-400 M which could be provided by curbing capital expenditure and reducing Bulgaria's contribution to the EU budget.

CITUB also proposes an increase in child benefits by BGN 50, one-time energy assistance, and a minimum wage hike to BGN 340.