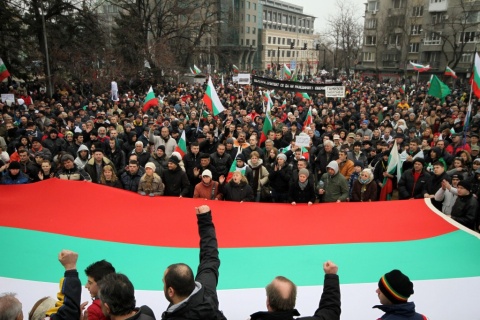 Varna has been called "the capital of Bulgarian protests," as locals staged the most massive rallies in the country. Photo by BGNES

Clashes with the police marked Sunday the protest rally in Bulgaria's Black Sea city of Varna.

Bulgarians across the country staged once again demonstrations against high utility bills, monopolies, poverty, economic stagnation, corruption, and the political model of ruling the country after the fall of the Communist regime in 1989.

The rallies, however, did not bring together as many people as previous weekend marches.

The largest one was once again held in Varna where 2 000 (compared to earlier 50 000 to 60 000) took to the streets. In addition to the above demands, people in Varna are asking for the collective resignation of the Municipal Council, the Prosecutor's Office, the Regional Governor, an audit of the City Hall, an audit of all municipal companies, and a civic quota in all committees of the Council.

Some, however, have voiced disagreement with the dissolution of the Municipal Council over fears it would lead to chaos in the city.

On Sunday, Varna residents occupied once again the key "Asparuhov Bridge" and the railroad station.

Clashes with police occurred near the City Hall after an argument between one of the informal leaders of the protests, Ivan Petrov, and young man, Martin Demirev, who was arrested at another rally a month ago for spraying Petrov with some substance. Demirev spent 5 days behind bars.

Demirev was arrested again Sunday after approaching Petrov and shouting: "Idiot! Because of you I was in jail for days!" Upon that police handcuffed him and put him in a patrol car.

However, a large group of demonstrators surrounded the vehicle, threatening to overturn it, pounding on it and sitting and laying on the pavement to block it. Police reinforcement was sent to free the patrol car. There are no reported injuries.

Ivan Petrov asked the police officers to release the detainee and Demirev was let go.

Petrov, a self-proclaimed protests' leader, had a number of followers initially, but later faced strong opposition from many of them.

On "Asparuhov Bridge" the rally was greeted by honks of truck and car drivers. The blockade of the railroad station delayed by 15 minutes the train departing for the northeastern city of Dobrich.

The procession moved to the headquarters of power distributor Energo-Pro through the courthouse and is expected to return to the City Hall.

Varna people continue to pile rocks, stones and flowers near the City Hall where Plamen Goranov, 36, set himself on fire on February 20th, the very same day when the Cabinet of Prime Minister, Boyko Borisov, and his Citizens for European Development of Bulgaria party, GERB, resigned amidst the unprecedented since 1997 protests.

The self-made monument was inspired by a well-known poem of Bulgarian national poet Ivan Vazov, dubbed "Heap of Stones" in sign of indignation and protest against Yordanov.