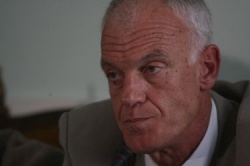 The Deputy Chairman of the Bulgarian Academy of Sciences, BAS, and its Scientific Secretary, Prof. Nikolay Miloshev. Photo by OFFNews

The information was reported by the site OFFNews, citing insider sources, and revealing the names of nearly the entire caretaker government ahead of the official announcement.

Miloshev is also the Deputy Head of the BAS Institute for Geophysics and Geography and a top earthquake expert.

Bulgaria's Ambassador to France Marin Raykov is tipped as the most likely caretaker Prime Minister. Initially he has been offered a ministerial post, but during the negotiations it has been decided that he would lead the caretaker government.

OFFnews have not received a confirmation on the Sports Ministry where two names remain on the table – of marathon swimmer and champion, Petar Stoychev, and former Sports Minister Vassil Ivanov-Luchano.

There are two names for the Defense Ministry as well – Boyko Noev and Todor Tagarev.

President, Rosen Plevneliev, is to name the caretaker government at 4 pm.