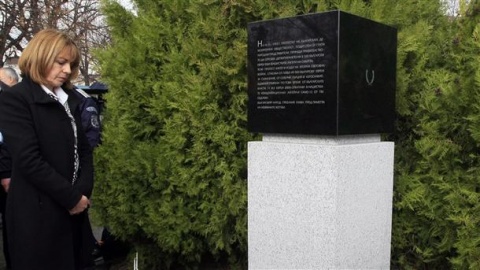 Sofia mayor Yordanka Fandakova in front of the memorial plaque. Photo by BGNES

A commemorative plaque of thankfulness to rescuers and rememberance for victims was placed in Bulgarian capital Sofia on the day Bulgaria celebrates the 70th anniversary of the rescue of Bulgarian Jews in WW II.

The memorial, located in the park near the Bulgarian Parliament, was unveiled by Sofia mayor Yordanka Fandakova, Shalom Jewish organization chair Maxim Benvenisti, and Israel ambassador to Bulgaria Shaul Kamisa-Raz.

Other official guests included Parliament Speaker Tsetska Tsacheva and Vice-Speaker Georgi Pirinski, representatives of the Council of Ministers, as well as members of the diplomatic corps in Sofia, including the ambassadors of Greece, Russia and the USA.

The Kaddish prayer was also read out as an address to God in the memory of those who fell in the Holocaust.

Celebrations of the 70th anniversary of the rescue of Bulgarian Jews will continue Sunday at the Sofia Synagogue and the Bulgaria Concert Hall.

In 1943, Bulgarian society, including MPs, intellectuals, clergy and ordinary citizens vehemently opposed plans by the government to deport the country's Jews to death camps at the behest of Bulgaria's Nazi allies in WW II.

However, Jews in Bulgarian-occupied territories in neighboring Yugoslavia and Greece were deported and were killed in death camps, a fact acknowledged in a declaration by the Bulgarian Parliament.