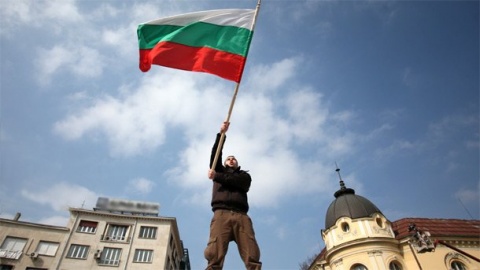 Bulgaria's "Eagles' Bridge" movement's main demand is the State getting a loan to up by 10% wages and retirement pensions over high utility bills. Photo by BGNES

Anti-government protesters in Bulgaria's capital Sofia have announced the formation of a new civic movement.

The movement has been named "Orlov Most for Change." Orlov Most (Eagles' Bridge) is a symbolic Sofia intersection that became the scene of massive protests last month.

One of the protests' organizers, Yanaki Ganchev, declared Saturday that the civic movement will not be transformed into a party and will not take place in the upcoming snap elections.

Some of the nearly 50 protesters who gathered in downtown Sofia on Saturday even told local media that they do not intend to cast ballots.

They have instead called for Election Code amendments.

The movement's main demand is the State getting a loan to up by 10% the minimum monthly wage, wages lower than BGN 500 a month and retirement pensions over high utility bills. Their deadline is July 1, 2013. They are also asking to reduce unemployment by financing various projects.

There is another meeting of representatives of demonstrators, held also on Saturday in the central city of Gabrovo.

Hundreds of thousands of Bulgarians have been protesting for nearly a month against the political model of ruling the country. The demonstrations started as protests against the unbearable utility bills, the monopolies and the wide-spread poverty, and later turned into a civil unrest and political demands.