Berbatov Reconciles with Fiorentina, Proposes to Pay for Plane Ticket 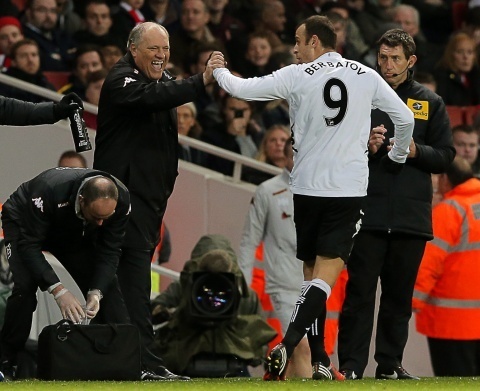 Dimitar Berbatov of Fulham (R) celebrates with Fulham`s manager Martin Jol (L) after scoring a penalty against Arsenal during the English Premier League soccer match between Arsenal and Fulham at The Emirates Stadium, London, Britain, on 10 November 2012.

At the end of August 2012, Berbatov was on a flight to Florence to sign with Fiorentina when it emerged that he had received an offer from Juventus while other football clubs in Europe were also showing interest in him.

The striker eventually moved to Fulham,

Fiorentina's sporting director Daniele Prade has now revealed that the club is no longer angry at the Bulgarian.

"Did we hear from Berbatov? Yes, his agent called us. They were kind and they even offered to repay the famous flight ticket," Prade has said.

Fiorentina had already paid for the Bulgarian and his agent to fly to Italy before being snubbed. The club later demanded its money back.