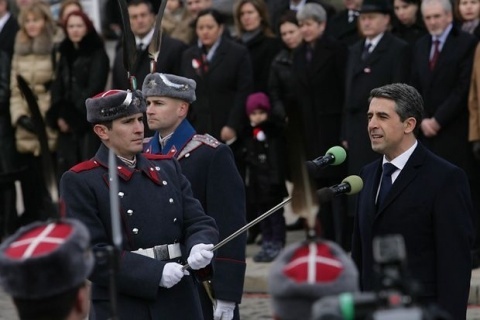 On March 3 Bulgarians celebrate the end of the 1877-8 Russo-Turkish war, which led to the liberation of the country from a 5-century rule by the Ottoman Empire.

"March 3 is the fulfillment of the lasting faith and dream of Bulgarians – freedom of their homeland. There are pages in our history that will always be a source of pride and self-esteem for us and benchmarks for our national identity. This day is a symbol of our State; a day when we bow to those who sacrificed their lives for our independence," Plevneliev said, speaking from the square before the Parliament during the solemn ceremony for Liberation Day.

He noted the Liberation helped Bulgarians endure the Balkan wars; taught them wisdom; gave them the courage to build their State and adopt the Tarnovo Constitution as the most democratic in Europe for this time in history.

"Are we ready now to teach the world again a lesson of how to find the right way through difficulties? We must preserve democracy, the rule of law; we must work for the wellbeing of our homeland. We can be useful for Bulgaria only through dialogue and constructive approach," the President concluded.

The sacred national colors and flags were brought out on the square in front of the building of the Bulgarian Parliament Sunday evening where the fireworks and the military roll-call ceremony were held.

Security measures have been upped as hundreds of thousands of Bulgarians have been protesting across Bulgaria and in many cities around the globe for weeks against poverty and political corruption.