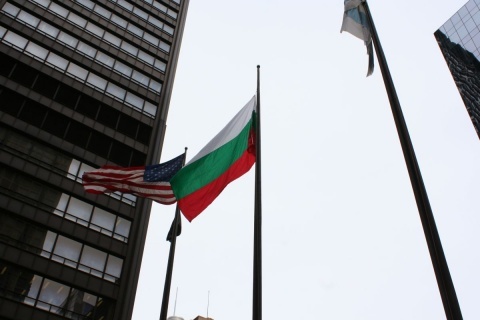 The Bulgarian national flag floats along the US one in downtown Chicago in commemoration of Bulgaria's National Holiday. Photo by Eurochicago.com

Bulgarians in 25 cities across Europe and North America are joining Sunday the protest rallies against monopolies and political corruption, held on the country's Liberation Day from 500 years of Ottoman rule.

Rallies have already been held in France, Spain, and Great Britain.

The largest rally in Canada will take place in Toronto.

The Bulgarian national flag is once again being hoisted in downtown Chicago, home of the largest Bulgarian community in North America, to mark Bulgaria's National Holiday, March 3.

The official ceremony commemorating the 135th anniversary of Bulgaria's liberation from Ottoman rule will begin with the performance of the national anthem and the lifting of the flag along with the American and Chicago flags at the city's "Daley Plaza.

The tradition dates from 1960, when a group of Bulgarians met with the then Mayor of Chicago, Richard G. Daley, Sr., father of the current mayor, asking him to declare March 3 the Bulgarian Day in Chicago. Moved by the patriotism and the story of the expats, the Mayor fulfilled the request. The celebrations were reinstated in 2006 by his son, Richard M. Daley Jr., with the day listed in the city's official calendar as a sign of respect for the Bulgarian diaspora in Chicago.

Bulgarians living in Chicago are also planning to stage demonstrations in support of the National Day of Protests in Bulgaria. There are an estimated over 200 000 of them in the "Windy City."

Hundreds of thousands across Bulgaria took to the streets once again Sunday in unprecedented since 1997 protest rallies against unbearable utility bills, monopolies and wide-spread poverty that turned into a civil unrest against the political model of ruling the country.

The demonstrations led to the resignation of the government of Prime Minister, Boyko Borisov, and his ruling Citizens for European Development of Bulgaria party, GERB

The protests are being streamed lived online.